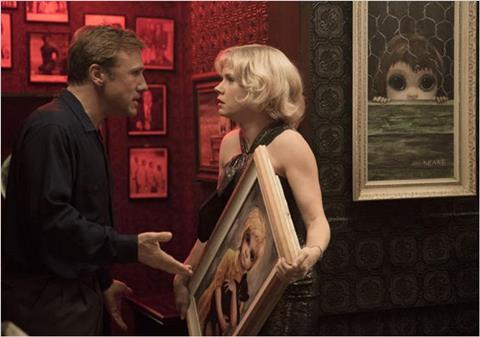 Stepping away from the worlds of fantasy, horror and science fiction for the first time in 20 years, director Tim Burton delivers one of his most thoughtful and accomplished works in far too long. Like 1994’s Ed Wood, Big Eyes is based on a true story about a misfit artist making kitsch, and the two films could be companion pieces, although this new offering is perhaps even more complex an examination of the relationship between creator and creation. Highlighted by two very different performances — Amy Adams’s muted, silently-suffering painter Margaret Keane and Christoph Waltz’s gregarious, master-manipulator husband Walter — Big Eyes is a crowd-pleaser that sees Burton toning down his usual visual flourishes, a development that’s most welcome.

With Big Eyes, he mostly puts the tics away, and as a result this is one of his most straightforward films. That’s not a criticism, however: The discipline of making a relatively standard biopic with a happy ending forces him to focus on storytelling in a way that he hasn’t with his other films this century.

Making its debut at a public screening at Film Independent at LACMA, Big Eyes is set to be released in the US on Christmas Day, one of several Oscar contenders opening around the same time. The Weinstein Company should expect strong reviews for Adams and Waltz, and while this modest comedy-drama won’t come close to matching Burton’s theatrical juggernauts such as Alice In Wonderland and Charlie And The Chocolate Factory, strong word-of-mouth could go a long way toward building awareness and interest.

Spanning about 10 years, Big Eyes details the troubled relationship between Margaret and Walter. When they first meet in the late 1950s, Margaret has run out on her no-good husband, taking her young daughter to San Francisco in the hopes of realizing her dream of becoming a painter. Walter is also a painter, but his banal portraits of Parisian street scenes can’t compare to Margaret’s unconventional, striking images of sad young children with markedly oversized eyes. A charmer instantly smitten with Margaret, Walter impulsively proposes, beginning a whirlwind romance.

But the problems soon arise once Walter discovers that nobody in San Francisco likes his art — while Margaret’s starts to attract attention. Utilising his natural talent for salesmanship, he tells prospective buyers that he’s the artist behind the so-called “big eyes” paintings, and once the money starts rolling in, Margaret feels too sheepish to contradict publicly her husband’s claim. This proves to be a mistake: As Walter’s fame grows, Margaret is forced to produce more and more paintings to meet the demand, having to maintain her husband’s lie so as not to jeopardize their financial success.

Big Eyes was written by Scott Alexander and Larry Karaszewski, the same duo who penned Ed Wood, and throughout their work (such as on The People Vs. Larry Flynt and Man On The Moon) there is an abiding tendency to play with biopic tenets, using real stories to address larger subjects like art, personal freedom and shifting societal conventions. In Big Eyes, the writers and Burton are fascinated by the unusual relationship between Margaret and Walter — she was the artist, he was the accomplished huckster who took all the credit and launched their empire — but they’re also interested in examining how this marriage was a microcosm for unequal gender roles of the time.

The bitter irony of Margaret’s life is that when she encounters Walter, she’s already fled one unhappy marriage, a commonplace occurrence today that was viewed as progressive, almost scandalous, for a woman in the 1950s. But all she does with her newfound freedom is fall into the arms of another domineering man who takes advantage of her trusting nature and meek demeanour. She’s a potential feminist icon who doesn’t quite have the courage to stand up for herself.

As a consequence, Adams has a difficult task: She’s playing a woman who’s a pushover, tolerating her husband’s megalomania while she’s trapped upstairs painting day and night. Margaret could be an unsympathetic doormat, but it’s to Adams’s credit that the character largely sidesteps that problem. An actress with a gift for conveying beguiling, uncomplicated sweetness in movies like Junebug and Enchanted, Adams makes Margaret’s hesitancy to act a symptom of her optimistic, naïve worldview, a condition that will slowly evolve the more terrible her situation becomes.

While Adams plays Margaret with understatement, Waltz’s Walter is a marvellously oversized construction. At first, Walter seems like a kind-hearted man who’s wounded by his lack of artistic recognition. (We can see why Margaret the wallflower would fall for his overeager romantic spirit and proactive attitude toward getting their work out there in the world.) But Waltz’s warm countenance eventually morphs into a chilly mask as his greed, ambition and ego begin to suck all the oxygen out of their marriage. The filmmakers have conceived Walter as a magnificent ass, and Waltz is terrific at modulating the character’s emerging wretchedness. Arrogantly dismissing his wife’s long-burning desire for creative expression — even if art critics hate her work, it’s incredibly personal to her — Walter is only concerned with money and stature. And yet, Waltz’s dynamic performance helps demonstrate why, weirdly enough, Margaret actually needed this self-obsessed monster: He knew how to sell the paintings’ maudlin qualities to the general public.

In recent years, Burton has retreated more and more into heavily production-designed movies like Dark Shadows, Alice In Wonderland and Sweeney Todd, revelling in off-the-wall characters and surreal environments that have reduced his aesthetic to self-parody. With Big Eyes, he mostly puts the tics away, and as a result this is one of his most straightforward films. That’s not a criticism, however: The discipline of making a relatively standard biopic with a happy ending forces him to focus on storytelling in a way that he hasn’t with his other films this century. To be sure, Big Eyes still meanders, and some of its broader themes become repetitive. But it doesn’t seem like a coincidence that, between this movie and Ed Wood, he abandons some of his visual shtick when exploring oddball characters’ connection to the art that’s their life’s passion.

But that inspection of art’s transformative power doesn’t end with Margaret and Walter. Big Eyes lightly teases the faddishness of the art community while also landing some blows on the masses’ insistence on turning personal art into a homogenised, marketable commodity. What’s most intriguing, though, is that Burton never really renders a verdict on Margaret’s paintings. Though some in the film dismiss her work (or, rather, Walter’s) as hackneyed — Terence Stamp as a crusty New York Times critic has a lot of fun trouncing these big-eyed portraits — the movie seems to be arguing that other people’s opinions don’t really matter. As the film builds to a final courtroom showdown between the estranged couple, the merits of the art mean far less than Margaret’s desire to assert her artistic identity. Simple, recognisable human behaviour often takes a backseat to quirkiness in Tim Burton’s films. But with Big Eyes, his compassion for Margaret is unmistakable, even touching.