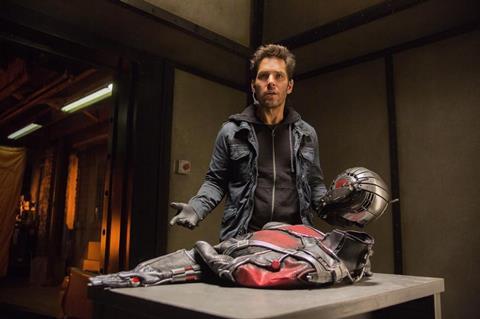 According to RealD representatives, around 42% of Ant-Man’s $57.2m weekend gross came from all available 3D platforms. The company said four of the top five titles on release were 3D titles.

Universal and Illumination Entertainment’s Minions slipped a respectable 57% to number two and added $49.3m for $215.8m in the second weekend.

Stablemate Trainwreck, a new comedy from Amy Schumer who stars alongside Bill Hader, opened at number three on $30.1m from 3,158 venues. Judd Apatow directed and produced with Barry Mendel.

This week brings wide releases for Columbia Picture’s action comedy Pixels; Fox’s YA mystery-romance Paper Towns from author John Green, whose The Fault In Our Stars was one of the breakout hits of summer 2014; and Jake Gyllenhaal boxing drama Southpaw via TWC.