FEBRUARY 29 UPDATE: Deadpool brought in a further estimated $39.8m from 75 international markets to propel the running total to $324.1m. 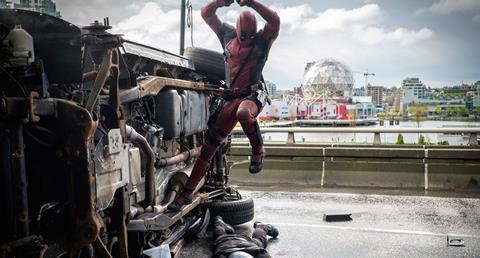 After two weekends, Spain and Italy have generated $7.3m and $6.2m, respectively.

The Revenant, Sunday night’s Oscar nominee that earned statuettes for directing, lead actor for Leonardo DiCaprio and cinematography, added $15.1m from 59 for $234.5m and stands at $405.1m worldwide. The survival thriller scored a superb $7.8m number one debut in France.

Alvin and the Chipmunks: The Road Chip added $5.8m from 50 for $139.5m, while DreamWorks Animation’s Kung Fu Panda 3 has reached $185.3m. It ranks as the top animation of all time in China, where it has taken $143.8m through Oriental DreamWorks.

The Martian stands at $395.7m, while Fox International Productions’ Neerja stayed top in India in the second weekend on $3.2m for $10.7m.

The animation Zootopia grossed $30m in its third weekend from 31 territories to reach $81.4m.

The fantasy adventure opened top in Russia on $3.8m, the Philippines on $2m. This week brings the South Korean debut.

UPDATED: Sacha Baron Cohen comedy The Brothers Grimsby arrived three weeks ahead of the North American launch and grossed $3.7m from 16 markets. The UK led the way with a $2.7m number two debut including previews.

The Mermaid grossed $1.3m from six SPRI markets for an early $14.6m. The film stands at $6.6m in Malaysia where after three weekends it ranks as the second biggest Chinese-language film in history. Vietnam has generated $4m. Overall including China the film stands at $500.5m.

Sunday’s best picture Oscar winner Spotlight added $2.9m for a $24.1m international running total. The drama has taken $1.6m in Italy after two weekends and opened in Germany and South Korea on $357,000 and $386,000, respectively.

Point Break added $1.8m for a $102.6m running total. Japan has amassed $3.2m via Warner Bros and China remains the most productive market for the film on $39.4m.

A Bigger Splash stands at $1.3m after three sessions, Oscar nominee Room $4.9m after seven, and Youth $1.2m after five.