JULY 18 UPDATE: Another weekend of records saw Finding Dory become the biggest animation release of all time, while Disney crossed $2bn faster than any studio before it and Sony’s Ghostbusters reboot opened in second place. 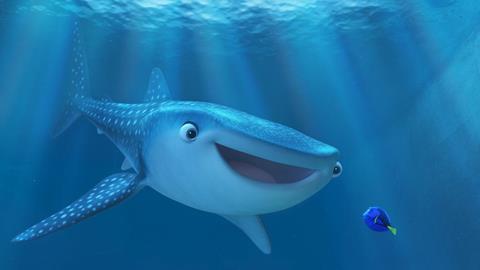 Illumination Entertainment/Universal’s The Secret Life Of Pets held on to pole position as a confirmed $50.8m catapaulted it to $203.4m in the second weekend.

The animation fireworks should not totally eclipse a decent if not spectacular $46m number two debut by the Ghostbusters reboot from Columbia Pictures and Village Roadshow.

While that was considerably better than the franchise original, which arrived at number one on $13.6m in 1984 and adjusts to $31.6m, the stated $144m production cost will be cause for concern.

The original’s $242.2m final North American gross remains a daunting prospect – even more so when adjusted to $561.9m – however the film could get past $100m and has posted a highly encouraging international start on $19.1m from three major markets and a clutch of smaller locales.

The film added $11.3m to overtake Shrek 2’s long-held record of $441.2m and pushed 2016 overall grosses to date past $2bn for The Walt Disney Studios in a new industry speed record. Last week the studio announced it had crossed $3bn internationally and $5bn worldwide.

The Legend Of Tarzan at number three stands at a lacklustre $103.4m through Warner Bros after three sessions, while The BFG ranks ninth on a highly disappointing $47.4m after three through Buena Vista.

Broad Green opened Bryan Cranston thriller The Infiltrator at number eight on $6.8m and Lionsgate delivered an excellent theatrical launch for Woody Allen’s Cannes Film Festival opener Café Society at number 18 on $359,289 from five venues for a $71,858 average. Amazon will release the film via its streaming service after the theatrical run.