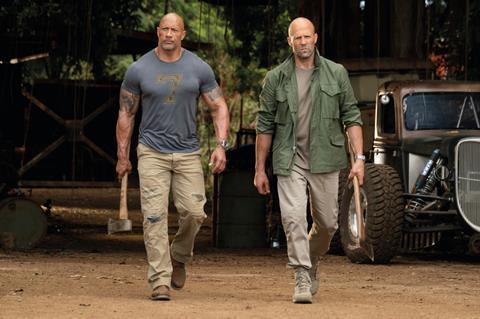 After two Disney films and one from Sony crossed the $1bn threshold in the past week, it is time for Universal’s Hobbs & Shaw to shine at the box office and the high-octane tentpole is expected to deliver a global day-and-date opening weekend in the $190m-$200m range.

The Fast franchise spin-off stars Dwayne Johnson, Jason Statham, Idris Elba and Vanessa Kirby and is forecast to deliver some $130m-$140m from 64 markets, where the UK, Australia, Brazil, Mexico, Germany, and Russia will be among the weekend highlights.

Hobbs & Shaw ventures into China on August 23 – a critical market for the franchise these days as is increasingly becoming the case – and France and Italy next week, and South Korea on August 14. Before that, however, the action thriller that stars Johnson and Statham as bickering operatives who must thwart Elba’s diabolical terrorist will have plenty to sink its teeth into this weekend.

Among the first out of the gate were the UK, Australia, Germany, Brazil, Russia and Spain on August 1. All eyes will be on how well the spin-off can gain traction in these markets. While it is not expected to match the huge grosses of the last two films – the highest-grossing in the 19-year-old Fast universe – Universal Pictures International executives will be looking for headline-grabbing performances in each market.

Disney’s annus mirabilis continues apace after The Lion King became the fourth release from the studio to cross the $1bn global threshold earlier this week and stands at $686.4m internationally, and $1.07bn worldwide.