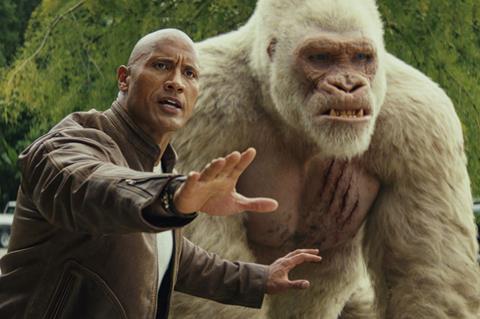 The Dwayne Johnson action adventure Rampage stands a good chance of crossing $200m through Warner Bros Pictures International this weekend and remains the one to beat.

The tentpole about a scientist who tries to stop mutant beasts run amok in Chicago has stormed to an early $152.6m after one week and $196.9m globally.

Warner Bros is on a roll. Steven Spielberg’s sci-fi smash Ready Player One stands at $370.8m and ventures into Japan this weekend. Meanwhile Game Night has grossed $40.7m, and Clint Eastwood’s thriller 15:17 To Paris $20.1m.

The R-rated comedy Blockers has reached $16.9m through Universal Pictures International and debuts in Taiwan and Singapore. Pacific Rim: Uprising stands at $125.2m, and supernatural thriller Truth Or Dare $3.6m from the early stages of its run heading into around 18 smaller markets this weekend. Lady Bird has grossed $24.4m.