JANUARY 23 UPDATE: Universal’s horror film starring James McAvoy as a kidnapper with multiple personalities soared to number one on its debut. 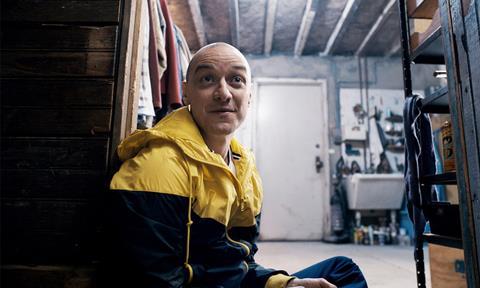 Split took a confirmed $40m from 3,038 theatres and marks Syhamalan’s first number one opening weekend since The Village in July 2004 and his first film since low-budget hit The Visit in 2015. Anya Taylor-Joy also stars.

High Top Releasing opened comedy The Resurrection Of Gavin Stone in 19th place on $1.2m from 887. Animation The Red Turtle opened through SPC at number 44 on $21k from three sites.

This week’s wide releases are: Sony/Screen Gems’ Resident Evil: The Final Chapter starring Milla Jovovich; TWC’s Gold with Matthew McConaughey; and Universal’s beleaguered family film A Dog’s Purpose, which has come under fire from animal rights group PETA after the leak of disturbing footage over the treament of a dog.