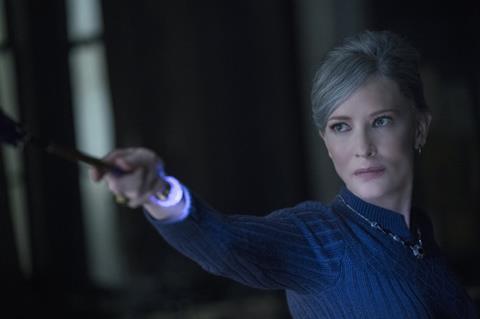 ‘The House With A Clock In Its Walls’

SEPTEMBER 24 UPDATE: Amblin Partners’ fantasy The House With A Clock In Its Walls debuted top in North America on a confirmed $26.6m for a solid result through Universal as Warner Bros horror The Nun crossed $100m in its third weekend.

Assassination Nation and Life Itself disappointed in their opening weekends, Michael Moore’s Fahrenheit 11/9 opened well although insiders doubt its longevity, and Colette and The Sisters Brothers delivered sparkling debuts.

Cate Blanchett and Jack Black star in The House With A Clock In Its Walls, which also ventured into its first international territories through Universal and Amblin Partners.

Eli Roth adapted John Bellairs celebrated gothic children’s novel about an orphan who helps his magical uncle find a clock with the power to end of the world.

New Line’s The Nun, which remained the top international release at the weekend, crossed $100m in its third weekend, dropping 45.4% and one place to number three on $9.9m for $100.6m.

Fresh from its world premiere at TIFF, Michael Moore’s latest documentary Fahrenheit 11/9 opened through Tom Ortenberg’s Briarcliff Entertainment at number eight on $3m in 1,719 sites. Were this a narrative feature, this would be a weak debut, however in and of itself this was an impressive result for a nationwide release of a political documentary, even if there are few comparable data points.

The question is how will it perform in its second weekend and beyond. The debut pales against the $23.9m June 2004 debut of Moore’s Fahrenheit 9/11 (unadjusted for inflation), however that was an outlier and Moore’s star has been waning at the box office in recent years. His latest earned favourable reviews and while the plan must be for it to remain in the public discourse heading into November’s US mid-term elections, industry observers expect it to drop away quickly.

In its second weekend Lionsgate’s mystery A Simple Favor with Anna Kendrick and Blake Lively climbed one slot to number two after a slight 36% drop, adding $10.3m for $32.4m. Fox’s The Predator fell 62.7% and three slots to number four, adding $9.2m for $40.9m in its second session.

Neon’s Assassination Nation, one of the buzz titles from Sundance that just played TIFF Midnight Madness, debuted at number 15 on a disappointing $1.1m in 1,403 sites.

The two best limited launches of the session came from Bleecker Street and Annapurna Pictures. The former debuted period drama and Sundance hit Colette, starring Keira Knightley as the French novellist and Nobel Prize nominee most famous for writing Gigi, at number 27 on $161,179 in four venues for a $40,295 average.

Annapurna released Jacques Audiard’s western The Sisters Brothers produced by and starring John C. Reilly alongside Joaquin Phoenix at number 33 on $115,575 from four for a $28,894 average.