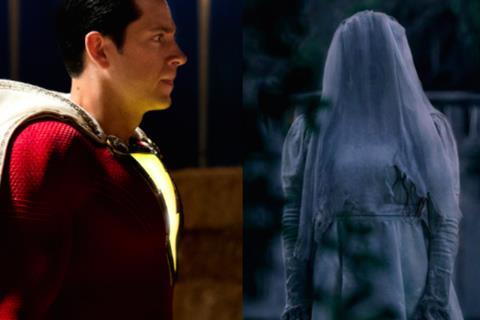 Shazam! The Curse Of La Llorona

Superhero adaptation Shazam! has dominated the global and international charts for the past two weekends and faces a challenge from The Curse Of La Llorona, the latest horror film to emerge from The Conjuring stable that launches in select key markets this weekend day-and-date with North America.

Shazam! has generated $178m and debuts in Japan on Friday (19), which could help the DC Entertainment and New Line tentpole on its way past the $200m international mark. However the question is, how much of its box office will La Llorona cannibalise?

Universal Pictures International executives report that DreamWorks Animation’s How To Train Your Dragon: The Hidden World has amassed $354.6m, while Us, Jordan Peele’s horror follow-up to Get Out that stars Lupita Nyong’o, stands at $73.4m. Last weekend’s release, the body-swap comedy Little starring Issa Rae, Regina Hall and Marsai Martin, has reached an early $3.3m. It opens this week in South Africa, Trinidad & Tobago, and a smattering of African and Caribbean nations. Boy Erased starring Lucas Hedges opens in Japan, Fighting With My Family in Singapore and Thailand.

Fox International gives the faith-based drama Breakthrough starring Chrissy Metz, Josh Lucas and Topher Grace a push in Australia and Mexico, among others, in the same week it launches in North America. 1940s-set Bollywood romance Kalank opens in India and the UK.