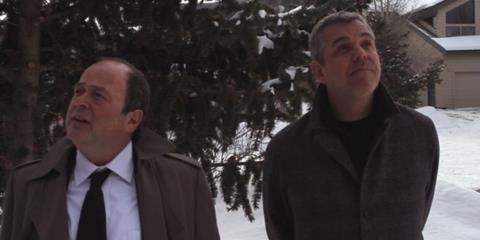 A nicely nuanced and intriguingly watchable film that is modest in structure but substantial in subtext, Boxing Day is driven by nicely textured performances from Danny Huston and Matthew Jacobs and makes great use of locations and its hand-held camera style.

Danny Huston’s character exudes an authority and polite determination to make things happen they way he wants them to, while Matthew Jacobs offers a genial, almost eccentric, performance that blends pathos with some sly humour.

Screening in the Orizzonti section of the Venice Film Festival – the only British film in section this year, it is the sort of film that should appeal to festivals and could also intrigue art house distributors aware that Huston has a certain profile and who will enjoy the interplay and dynamics between the two lead actors.

The film is the final part in a trilogy of adaptations of Tolstoy novellas writer/director Bernard Rose has made with Danny Huston. The other parts were Ivansxtc (2002) and The Kreutzer Sonata (2008), with Boxing Day a contemporary-set adaptation of Tolstoy’s Master And Man. All three films were made with minimal crews and lightweight digital equipment and all set (partly in the case of Boxing Day) in modern-day Los Angeles.

Basil (Huston), a struggling, indebted businessman, leaves his young family in Los Angeles the day after Christmas to try and contrive a lucrative series of property deals that could solve all his problems.

He flies to Denver to view a series of recently foreclosed properties with a view to buying them from banks, refurbishing at a minimum cost and selling on for a quick profit. He hires local chauffeur Nick (Jacobs), and Englishman in the US, to drive him around the snowy and increasingly mountainous area, but as night sets in the car becomes trapped on an icy road and the two men face an uncertain fate.

With much of the film set in the car as the two men drive around, the lightweight shooting style comes into its own as its picks up on the power shifts in the relationship and embraces the sense that certain moments may have been improvised or at least embellished linked the circumstances they find themselves in.

Danny Huston’s character exudes an authority and polite determination to make things happen they way he wants them to, while Matthew Jacobs offers a genial, almost eccentric, performance that blends pathos with some sly humour. Jacobs was the screenwriter on Bernard Rose’s debut film Paperhouse (1988), and while he had a small role as a journalist in Rose’s recent film Mr Nice, this film marks his debut as a lead actor.

Nick is at times an amusingly inept driver, and while keen to befriend his passenger he is aware of the role of ‘master’ and ‘man’. As the film develops and the two begin to share details of their past and relationships, things gradually begin the shift, with the powerful climax coming as they find themselves trapped in their car as the temperature drops and things get rather dangerous.

The title Boxing Day comes from the fact that in the UK the day after Christmas is a public holiday. Tradition had it that the well off made a gift, or a tip, and placed it in a box to give to their workers or those less fortunate.