Cinema and the city

Duncan Speakman from production company Circumstance, which creates cinematic experiences in unexpected environments, on the future of cinema in the city. 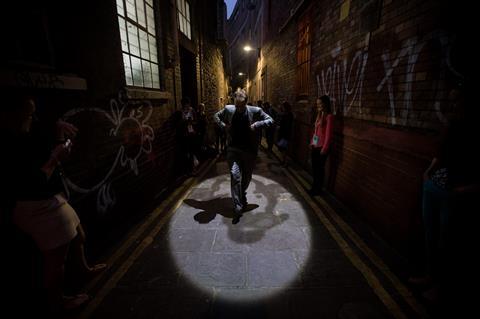 There’s that moment in a film where the sound drops away to be replaced by a haunting piece of music playing over silent action, it’s a moment that seems unique to cinema. It’s these kinds of aesthetics, along with slow motion, colour treatment, monsters and jetpacks that separate cinema from our everyday experience of the world. And yet increasingly audiences are being offered moments like this across city streets, hidden alleys and abandoned warehouses.

From melancholic audio walks to tense zombie apocalypses, artists are using the city as a cinematic backdrop in which they can directly place the audience. Simon Evans from Slingshot describes it as  ‘riffing on the city, it offers a scale of environment we could never afford to build artificially’.

Why hire a crowd of extras when you could put your audience in the middle of a real crowd? The techniques of low-budget filmmaking are being re-applied into live events.

In Slingshot’s city wide game ‘2.8hrs Later’ you are tasked with travelling on foot across a real city collecting supplies and avoiding zombies. Players run, sweat and scare themselves witless in an experience they repeatedly describe as like ‘being in a film’.  In our own work as Circumstance we compose explicitly ‘cinematic’ scores and let audiences move through cities listening to them while actors (or other audience members) enact small staged scenes that blend in with the everyday world. These scenes become framed and emotionally heightened by the music, placing you in the centre of the fiction.

The reason these and many other similar projects work so well is in part due to their relationship with cinema. They use our established understanding and memory of cinematic moments, and afterwards the audience describe their experiences as film-like because it reminds them of genres and tropes, yet the projects exist as self-contained works each with their own story, not tied to a specific film.

There are also events created where entire fictional sets are constructed. Organisations like Secret Cinema create worlds based around existing films, so you might find yourself wondering around a recreation of a street in Bladerunner, and then eventually sit down for a screening of the film. DreamThinkSpeakwill take over an entire building and create a poetic series of filmic sets for the audience to explore.

The growth in popularity of these types of events might suggest that audiences desire something more than sitting in a room watching a screen, but I rather think that they are totally dependent on the existence of cinema. This is not about competing media it is about expanding the cinematic experience out of the multiplex and into your everyday life. The term ‘immersive’ is currently very popular for describing these theatrical events, but I feel this is misleading. Sitting in a darkened theatre you are truly immersed in the world on the screen, but when you physically step into these worlds, I’d say you become ‘present’.

In a time when we can consume film on a number of devices (of varying size and quality) these events offer a true ‘you had to be there’ type experience, but can they directly connect to screened films without them becoming just an extended marketing exercise? We’ve seen ‘trans media’ projects all over the place that combine different mediums/experiences, but we’re still waiting for that big cinematic event that relies on an extended experience as part of the narrative, where the story on the screen is dependent on the audiences experience in a city wide event, and vice versa.

Rethinking the way we use our cities is a ubiquitous theme across gaming, social media and civic data. The recent Making the City Playable Conference in Bristol brought together a wide range of thinkers and practioners to explore this area, and it showed that ‘playable’ doesn’t always have to mean something connected to ‘games’ or ‘fun’, it really just means it the rules of use are not set, and they can be played ‘with’. The 2014 Playable City Award, Shadowing, which is running until the end of this month throughout Bristol, creates continuous cinematic experiences. As the sun goes down and Bristol’s street lights come on, traces of those who’ve passed under the lights are played throughout the city, re-animating the streets. As you walk under the light, the shadow of the previous visitor walks beside. While you interact or react to the shadow, your movements and actions are recorded, becoming the shadow for the next visitor. If a visitor remains under the lamp, the lamp reaches further back in time, playing back the shadows of its previous visitors.

We’ve seen city based events with a cinematic approach, and we’ve seen events that expand an existing film into the physical world, now we wait to see one story told co-dependently across both environments, a narrative that happens partly on a projection screen and partly in the world around you.  There is a wealth of creative expertise in both these areas, what will happen when they work together on stories from the ground up, and not just draw on each other for inspiration or novelty marketing value. Maybe then the word cinema or film will mean something different, and we’ll really be saying ‘oh, you had to be there, you had to be present’.