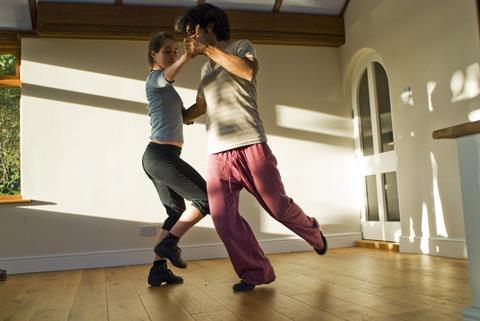 The dance of relationships is at the core of Sasha C Damjanovski’s nicely staged, though not massively dramatically engaging, indie British film which blurs the line between the story of a bickering English couple on holiday with the performance of the two dancers the woman is rehearsing with.

Conversations about their relationship and the various issues between them are intercut with the dancers practicing their contemporary dance routines.

Dance enthusiasts may be intrigued with this attractively structured film, though festival exposure is the most logical route.

Alice (Johanne Murdock) and Neil (Adam Napier) are on holiday in a charming country house, while she is also apparently working with her dancers (Ismael Ludman and Guggi Zuzakova) in the house’s conservatory. Alice and Neil seem to like each other, but have problems getting on - Neil is on leave from work and has a medical condition, while Alice has issues of her own.

Their conversations about their relationship and the various issues between them are intercut with the dancers practicing their contemporary dance routines. The dance sequences are nicely staged, though the Alice vs. Neil routine gets a little wearing with the dialogue working well at times but feeling far too forced at others.

He bounces on a trampoline in their garden a lot while she talks to herself, while the spectre of suicide looms over both of them. But they learn to dance together in the end, as film makes good use of English rural locations.