As Churchill wraps its shoot, Screen can exclusively reveal another image from the film. 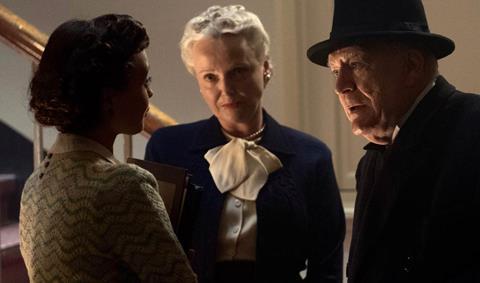 Brian Cox stars as Churchill, Miranda Richardson as his wife Clemmie and Ella Purnell as his secretary (all pictured above). The cast also features John Slattery as General Eisenhower, James Purefoy as King George VI, Julian Wadham and Richard Durden.

Jonathan Teplitzky (The Railway Man, TV’s Marcella) directs based on a script by British historian and author Alex von Tunzelmann.

The production, which tells the story of Churchill during the days preceding D-Day, shot for five weeks in Scotland, including around Glasgow and Edinburgh.

Producers Van Carter, Taussig and Tempest said: “With an exceptional script, a powerhouse performance by Brian Cox, and Jonathan’s crafting of a beautiful piece of cinema, we think this is the definitive portrayal of Churchill. Taking the less predictable path with such a wonderful cast will bring this story home to a global audience.”