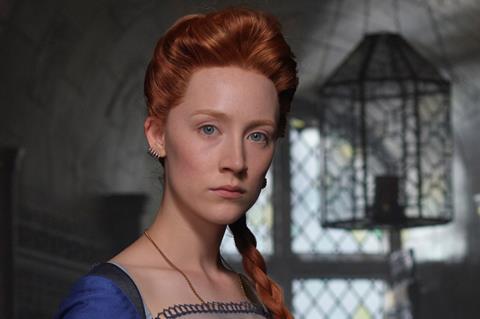 The 2018 awards race officially closed on Sunday, with the curtain coming down as Fox Searchlight’s The Shape Of Water triumphed at the Oscars.

While the 2019 race may feel like a distant prospect, the recent Sundance and Berlin festivals have kick-started murmurings about potential contenders, and already talk is turning to which releases could be leading the conversation come next year’s awards season.

Below, Screen runs down 12 of the early-run candidates.

First Man (Universal Pictures)
Despite La La Land having best picture snatched away by Moonlight at the 2017 Oscars, Damien Chazelle still walked away as the youngest ever winner of the best director prize. He’s likely to be back on the awards trail in 2019 with his Neil Armstrong biopic First Man, which will chronicle the life of the first astronaut to walk on the moon and is currently filming in the US. Ryan Gosling is starring alongside Claire Foy as Neil and Janet Armstrong; Oscar-winning screenwriter Josh Singer (Spotlight) penned the adaptation of James R Hansen’s authorised biography; and Chazelle’s La La Land collaborators Justin Hurwitz, Linus Sandgren and Tom Cross are back to handle the, respectively, music, cinematrography and editing. A biopic about an American hero: Universal will be feeling confident about this one.

If Beale Street Could Talk (Annapurna Pictures)
Moonlight director Barry Jenkins is shaping up to be an awards player again this year with his adaptation of James Baldwin’s novel about a pregnant woman in Harlem who races against the clock to prove her lover innocent of a crime. Newcomer KiKi Layne beat more than 300 fellow auditionees to land the lead role and will star alongside Regina King, Dave Franco and Diego Luna. This project is one of a number of high-profile original productions that Megan Ellison’s Annapurna will be touting in 2018 through the company’s new US distribution arm.

Mary Queen Of Scots (Focus Features/Working Title Films)
Two of this year’s best actress nominees, Saoirse Ronan and Margot Robbie, seem destined to be in contention again for their respective portrayals of the titular Mary Stuart and Queen Elizabeth I in this historical drama from UK powerhouse Working Title Films. The screenplay is by House Of Cards original showrunner Beau Willimon, while director Josie Rourke, artistic director at the Donmar Warehouse, makes her second film foray after 2011’s Much Ado About Nothing.

Backseat (Annapurna Pictures/Plan B Entertainment)
After picking up an Oscar for his The Big Short screenplay in 2016, writer-director Adam McKay is looking to be a candidate again with this biopic of former US vice president Dick Cheney. Christian Bale, who has gained weight for the role, is playing Cheney, and the supporting cast includes 2018 best supporting actor Sam Rockwell as George W Bush, Amy Adams as Lynne Cheney and Steve Carell as Donald Rumsfeld. In the current political climate, the film could be a contender if McKay strikes the right tone. The Plan B Entertainment team of Dede Gardner, Jeremy Kleiner and Brad Pit produced the film with McKay, Kevin J Messick and Will Ferrell.

The Front Runner (Bron Studios)
Also tapping into the political climate could be Jason Reitman’s tale of US Senator Gary Hart, whose campaign in 1988 to be the Democratic candidate for president was derailed by revelations of an adulterous affair. Hugh Jackman stars as the beleaguered politician alongside JK Simmons and Vera Farmiga as Hart’s wife Lee. Bloom is handling international sales on the project, which has yet to line up a US distributor. 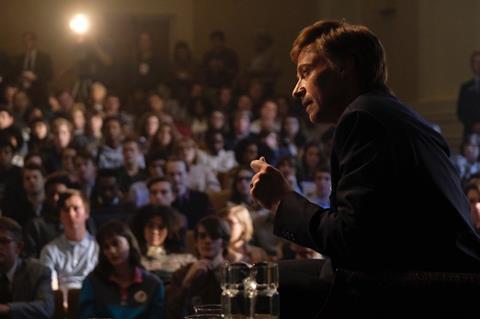 Hugh Jackman in ’The Front Runner’

Widows (New Regency Pictures/20th Century Fox/See-Saw Films/Film4)
Steve McQueen returns with his first feature since the Oscar-winning 12 Years A Slave with this more commercial-sounding project about a quartet of widows who plot a heist. The female-focused story won’t hurt its awards potential, and the film boasts awards pedigree with its producers, See-Saw’s Iain Canning and Emile Sherman, and in a cast which includes the likes of Viola Davis and 2018 best actor nominee Daniel Kaluuya. The project is an adaptation of crime writer Lynda La Plante’s 1980s UK TV series, with McQueen handling the adaptation alongside Gone Girl author/screenwriter Gillian Flynn.

Black Klansman (Blumhouse Productions/Focus Features)
Twice an Oscar nominee, Spike Lee may be looking at third time lucky with this Ku Klux Klan tale, which is being produced by Get Out trio Jordan Peele, Jason Blum of Blumhouse Productions and Sean McKittrick of QC Entertainment. John David Washington is starring in the true story of an African-American police detective who infiltrated the KKK, rising to be the head of his local chapter. Adam Driver and Topher Grace are in the supporting cast.

Boy Erased (Focus Features/Anonymous Content)
Joel Edgerton’s second effort as a director – following 2015’s well-received The Gift – chronicles a teenager undergoing gay conversion therapy and was adapted by Edgerton from Garrard Conley’s 2016 memoir of the same name. Lucas Hedges, an Oscar nominee for Manchester By The Sea, stars alongside Russell Crowe, Nicole Kidman and Edgerton himself. Steve Golin of Anonymous Content is one of the producers alongside Edgerton.

Peterloo (Amazon Studios/BFI/Film4)
Seven-time Oscar nominee Mike Leigh will be hoping to break his Academy Award duck with his most ambitious project to date, a period drama about the infamous 1819 Peterloo Massacre in Manchester, England, during which hundreds of protesters who had gathered to demand Parliamentary reform were killed or injured by British cavalry. Leigh’s longtime cinematographer Dick Pope is on board, as is Jacqueline Durran on costumes. Amazon Studios part-financed and has US rights, while Cornerstone Films is handling international sales.

The Little Stranger (Focus Features/Potboiler Productions/Element Pictures/Film4/Pathe)
Lenny Abrahamson’s follow-up to the Oscar-winning Room is now in post-production and could be a player in next year’s awards race. Domhnall Gleeson, Ruth Wilson, Will Poulter and Charlotte Rampling star in the period ghost story, which Lucinda Coxon (The Danish Girl) adapted from Sarah Waters’ 2009 novel. Gail Egan and Andrea Calderwood of Potboiler produce with Ed Guiney from Element.

The Favourite (Fox Searchlight/Scarlet Films/Element Pictures/Film4/Waypoint)
An Oscar nominee for his The Lobster screenplay, Yorgos Lanthimos skirted the Oscars this year with his edgy The Killing Of A Sacred Deer, but may well be back in 2019 with this historical drama about the court of Queen Anne in early 18th-century England. The film’s high-profile female cast boasts the likes of Emma Stone, Olivia Colman and Rachel Weisz. Ceci Dempsey of Scarlet Films produces with Element’s Ed Guiney and Lee Magiday alongside Lanthimos. Key crew include American Honey DoP Robbie Ryan and costume designer Sandy Powell.

The Sisters Brothers (Annapurna Pictures)
Jacques Audiard’s Gold Rush-set feature could be a contender next year. John C Reilly, Joaquin Phoenix, Jake Gyllenhaal and Riz Ahmed star in the noir Western, which is the A Prophet, Dheepan and Rust And Bone director’s first film shot entirely in the English language. Reilly and wife Alison Dickey produce with Michel Merkt, Michael De Luca and Pascal Caucheteux of Why Not Productions. IMR International is handling sales.

Foreign language contenders
Pawel Pawlikowski’s Polish-language Cold War is getting strong early buzz and could be a contender for the foreign language Oscar, as could Asghar Farhadi’s Everybody Knows, Alfonso Cuaron’s Roma and Gustav Möller’s thriller The Guilty.

Acting hopefuls
In a change of pace from her lead role in Netflix series The Queen, Claire Foy could be in the best actress conversation for playing Lisbeth Salander in The Girl in the Spider’s Web. Lady Gaga could also be up for that prize for her lead role in Bradley Cooper’s A Star Is Born, as could Glenn Close for SPC’s The Wife, which debuted at Toronto in 2017, Keira Knightley for Sundance premiere Colette, Emily Blunt for Mary Poppins Returns and Nicole Kidman for her transformative turn as a detective with a tough past in Destroyer, if the film finds a US distributor in time.

Despite the exit of director Bryan Singer under a cloud from Bohemian Rhapsody, Rami Malek could be in contention for best actor accolades for his portrayal of Queen frontman Freddie Mercury, as could Seth Rogen for his portrayal of news anchor Walter Cronkite in David Gordon Green’s JFK drama Newsflash. Further contenders could be found in Felix van Groeningen’s Beautiful Boy, which stars Steve Carell and 2018 nominee Timothée Chalamet.

Other potential winners
Winter’s Bone director Debra Granik could be attracting writer or director accolades for her drama Leave No Trace. Disney-Pixar are usually a shoe-in for animated feature and should be again with The Incredibles 2. Disney could also be in that race with Wreck-It Ralph 2, while Wes Anderson’s stop-motion Isle Of Dogs is also a likely candidate. Steven Spielberg’s Ready Player One could be a contender in technical categories alongside Andy Serkis’ Mowgli, Jurassic World: Fallen Kingdom and Avengers: Infinity War.