Projects from China and Hong Kong available at the American Film Market will serve up a sizzling mix of action thrills, visual feasts and culinary delights. 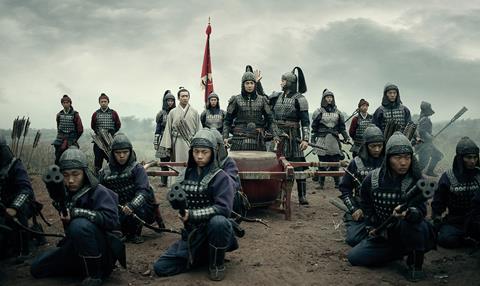 The follow-up to Leste Chen’s 2014 psychological thriller The Great Hypnotist tells the story of a famous novelist who recovers from a nasty divorce by having a decade of his memory wiped. But when he tries to recover the lost memories, he finds himself in the mind of a serial killer. Huang Bo, Xu Jinglei and Yang Zishan head the cast of the $22m film, which is scheduled for release in 2017.

Zhang Jin (Ip Man 3), Shawn Yue, Wu Yue and Janice Man star in this $15m action thriller about a cop who is caught in the crossfire between rival factions in a gold-smuggling ring. In post-production, the film marks the feature debut of Jonathan Li, associate director on Overheard 2, Overheard 3 and Blind Detective. Soi Cheang and Paco Wong are producing for Hong Kong-based Sun Entertainment and YL Pictures, China’s iQiyi Motion Pictures and Sil-Metropole Organisation.

Cook Up A Storm

Building on the success of his cooking and travelogue show Chef Nic, Hong Kong actor Nicholas Tse heads the cast of this foodie drama as a Cantonese street cook who goes up against a Michelin-starred chef in a culinary competition. Directed by Raymond Yip Wai-man (The House That Never Dies), the film also stars Korean idol Jung Yong-hwa and features a special appearance by China’s Ge You. The film is in post-production for release during Chinese New Year 2017.

Gao Xixi’s period action title, in post-production, revolves around a trio of gangsters battling each other and rival mobsters in 1930s Shanghai. Starring Huang Zitao (You Are My Sunshine), Peter Ho (The Monkey King) and veteran actor Wang Xueqi (Iron Man 3), the film is one of the first major productions from Hong Kong-based YL Pictures, a subsidiary of China’s Yongle Group. Gao previously directed top-rated TV dramas including Legend Of Chu And Han, Three Kingdoms and Shanghai Bund.

In post-production, Gordon Chan’s period action film stars Sammo Hung and Vincent Zhao in the story of Chinese general Qi Jiguang, who defeated Japanese pirates along the Chinese coastline during the 16th century using maverick tactics. Well Go USA has rights for North America, the UK, Australia and New Zealand, and the film has also been pre-sold to a string of Asian territories. Release is tentatively scheduled for March/April 2017.

Starring Zheng Kai and Zhang Yuqi, action adventure The Golden Monk tells the story of a monk who realises he is the reincarnation of a fairy spirit that was cast down from heaven and seeks out his true fairy love. In post-production, the film is produced by Beijing Hairun Pictures and Mega-Vision Project Workshop. Zheng has credits including Chinese hits So Young and Running Man, while Zhang starred in CJ7 and The Mermaid.

Bill Kong is producing this action title about a criminal psychologist tracking a serial killer who targets people that have been acquitted of notable crimes. The cast is headed by Deng Chao, fresh from Stephen Chow’s blockbuster The Mermaid, Taiwanese actor Ethan Ruan (The Assassin) and Hong Kong actress Karena Lam (Zinnia Flower). In production, the film marks the feature debut of Xu Jizhou, who has directed several hit Chinese TV series.

Chinese actor Zhang Hanyu and Japan’s Masaharu Fukuyama star in John Woo’s highly anticipated action thriller Manhunt, which is currently shooting in Japan for Media Asia Films. Produced by Chan Hing Kai and Gordon Chan, the film is based on a novel by Juko Nishimura about a lawyer who is framed for murder and sets out on a mission to clear his name. The book was first adapted into a popular 1976 Japanese film starring Ken Takakura. Woo’s $50m version has also tapped Japanese art director Yohei Taneda and cinematographer Takuro Ishizaka.

In post-production, Benny Chan’s fantasy drama imagines a world where cats are aliens that secretly rule the planet, as either free-spirited mafia dons or seemingly harmless household pets. Louis Koo and Ma Li head the human cast of the film, which is being lined up for a tentative summer 2017 release. Chan Hing Kai, who recently produced Weeds On Fire and co-wrote The Mermaid, is on board as a script consultant.

Following their collaborations on Police Story 2013 and Little Big Soldier, Ding Sheng is directing Jackie Chan in this $50m action comedy that aims to revive the spirit of classic Chan comedies such as Project A and Drunken Master II. Chan stars as a railroad worker who leads a team of fearless fighters to derail the Japanese war machine in China, 1941. Young idols Huang Zitao, Wang Kai and Darren Wang also star. Backed by Sparkle Roll Media Corp, Shanghai Film Group and Beijing Going Zoom Media, the film is scheduled for wide release on December 30, 2016.

Andy Lau produces and stars in this $22m crime thriller about a cop battling a crime boss who plans a bomb attack in the busiest cross-harbour tunnel in Hong Kong. The cast also includes Jiang Wu (A Touch Of Sin) and Philip Keung (Firestorm). Herman Yau (Ip Man: The Final Fight) is directing from a script he co-wrote with Erica Lee, while Dion Lam (Kung Fu Jungle) is on board as action choreographer. Universe Entertainment and Bona Film Group are co-financing the film, which is in post-production for tentative release in the second quarter of 2017.

Show Me Your Love

Raymond Wong (PTU) and veteran Hong Kong actress Nina Paw (Crossing Hennessy) star in this family drama about a man who is reunited with the mother he barely saw as a child because she was forced to leave home for work. Filmed partly in Malaysia, Show Me Your Love is produced by the Hong Kong arm of Malaysia’s MM2 Entertainment, which has been ramping up production of Cantonese-language features. Ivana Wong (Love Detective) and Michelle Wai (Heaven In The Dark) also star in the film, which is scheduled for Hong Kong release in December.

In post-production, Ringo Lam’s Sky On Fire stars Daniel Wu in the story of a security guard embroiled in a battle to protect stem-cell research, which can potentially cure cancer, from falling into the wrong hands. The cast also includes Joseph Chang Hsiao-chuan, who starred in the director’s hit action thriller Wild City, along with actresses Zhang Jingchu and Amber Kuo. Produced by Skyman Development, the film is in post-production and is scheduled for release in China on November 25, 2016.

Well Go USA recently acquired North American and UK rights to Derek Yee’s long-anticipated 3D martial-arts epic, produced by Tsui Hark and starring Lin Gengxin and Peter Ho. Based on Gu Long’s classic wuxia novel, the film tells the story of an elite swordsman who is forced to fight a challenger determined to take his place at all costs. Produced by Bona Film Group and Yee’s Film Unlimited, Sword Master is tentatively scheduled for release in early December.

Starring Zhang Ziyi, Ge You and Japan’s Asano Tadanobu, Er Chang’s drama is based on the life of legendary mob boss Du Yuesheng, who ruled Shanghai in the 1930s. In post-production, the film is produced by Hu Xiaofeng and Zhang Dajun for Huayi Brothers, which will release in China on December 23. China Lion will release day-and-date in the US.

Wong Kwok Kuen, assistant director on Wilson Yip’s Flash Point, makes his directing debut with this gritty drama based on a true story about a gang leader trying to survive in a detention centre for young offenders. The cast is headed by Yau Hawk Sau (She Remembers, He Forgets) and Hong Kong singer and actor Kelvin Kwan (Lan Kwai Fong 2). Produced by Hong Kong-based Times Production, the film is in post-production for a spring 2017 release.