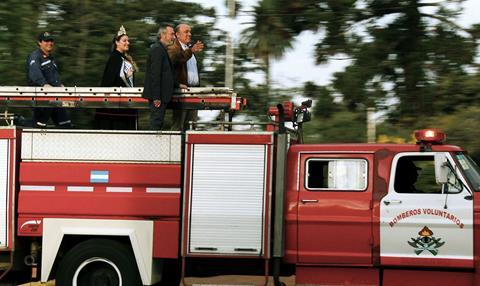 The Distinguished Citizen arrived at the Warsaw Film Festival (Oct 7-16) this week with several plaudits, including the Best Actor prize for its star, Óscar Martínez, in Venice and the responsibility of representing Argentina for the foreign-language Oscar entry.

Mariano Cohn and Gastón Duprat co-direct again, as they have previously with critical successes like 2009’s The Man Next Door. They also share the credit for the cinematography and editing of this acute satire about the dangers of revisiting the past and taking sides when it comes to art, culture and life. It’s hard to distinguish when one starts or finishes a sentence as they sat down with Screen to discuss their film about a Nobel prize-winning writer, played by Martínez (Wild Tales), who returns to his hometown in Argentina after decades away. So their answers below are à deux.

Screen: The Distinguished Citizen is an adult film in the best sense of the word, mixing humour and reflections about culture and society through its main character, the outspoken author played by Óscar Martínez.

This Nobel prize-winning writer is very provocative in his statements. One can agree or not with what he says, but we were mainly interested in the reaction this has in the audience, the reflections it can spark, like when he mentions the incompatibility of the terms “culture” and “subsidy”. Our film needed a subsidy to see the light. It’s not a film you can watch passively. It pushes you to take sides, but giving options to root for different characters, not always the writer played by Óscar Martínez.

I think this is true of other films we’ve made, like The Man Next Door. The main character himself changes, from the condescending and kind behaviour he’s got when he first sets foot in his hometown. He’s pushed to finally say what he really thinks and to see himself in the eyes of others, his star treatment, for example, the list of “musts” his agent sends – from the steamed fish dishes in his diet to the latex mattress – looks completely ridiculous in the context of a small town like that.

The characters have an unusual freedom to say what they really think.

That has a lot to do with Argentinian idiosyncrasy. People talk, a lot, and let others know what they think. Like the local thug that confronts the main character: he’s aggressive, but some of the things he says are quite articulate, like when he accuses the local celebrity of being a millionaire, having made a name selling the poverty and miseries of his hometown to the rich worldwide.

Black comedy is a complex genre. Here you combine it with quite an austere visual approach.

Our sense of comedy is very linked to all the decisions we take on a formal level, the mise-en-scène. That’s why we never delegate the cinematography or the editing. We do it ourselves. We like the idea of a more austere visual approach to focus on the work of the actors and the content in a way that we wouldn’t be able to do if we chose to work with different camera angles and points of view.

The classic shot-reverse shot dynamic doesn’t really go with us. To shoot a whole scene in a single shot might look easy, but it’s a risk you take. If it doesn’t work you are left with nothing on the editing table. The same goes with the naturalistic use of light and locations. Some things you can only find in real life.

What’s the secret of working together as co-directors?

A director has to take care of lots of aspects. We’ve got plenty to share since we take on other responsabilities. The doubts one might have are also shared and you know the other one won’t hesitate in saying what he really thinks if something is not working. All the decisions have to be clear before the shoot starts. In film there’s never anything so-called natural; the fresh or natural look has to be worked on.

How important was the work of Óscar Martínez?

He’s a great actor, and maybe before The Distinguished Citizen he hadn’t had the chance to prove to what extent he is. He’s subtle, and perfectly aware of what he’s doing in every shot. And he’s in every scene of the film. We even finished writing his dialogue with him. Every time we see the film we spot new things in his work, new details that reveal the great job he did.

It took five years to put the production together. How relevant is the co-production between Argentina and Spain?

We are directors, cinematographers, editors and also producers, so we are very aware of everything it took to make The Distinguished Citizen possible. The participation of Radio Televisión Española and A Contracorriente in Spain was the decisive push to make it true. In Argentina, Fernando Sokolowicz has always been our producer and part of the team, on the creative front too. We needed a robust budget for an eight-week shoot. To premiere the film in competition in Venice was great. We came out with 130 prints in Argentina in September (with distribution handled by Disney), which is a significant number for a mid-sized production.

It took five years, but you have also managed to make another film in the meantime.

Yes, Todo Sobre El Asado, which screened in the Culinary Cinema section at San Sebastián. It’s a documentary-fiction feature hybrid about the Argentinian obsession with barbecue. It’s wild in form and content, and quite irreverent.

Quite unusually, The Distinguished Citizen has also preceded a book that shares the same title.

Yes, The Distinguished Citizen, signed by the film character’s name, Daniel Mantovani, has already appeared in Argentinian bookstores and will also come out in Spain. It’s a book written by the fictional writer that is not the story of the film itself, but the book the character writes inspired by the visit to his hometown.

Did you write it?

No, we couldn’t possibly have. The ghost writer is a heavyweight of the literary world, but our lips are sealed.