‘Booksmart’ filmmakers on its 10-year journey to the big screen

It took a tag team of writers and producers plus debut director Olivia Wilde to complete Booksmart’ s 10-year odyssey to the screen. The filmmakers tell Screen about the power of female friendship. 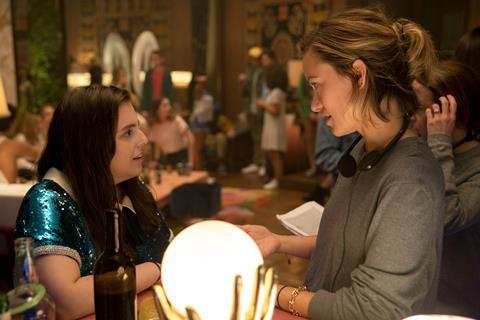 Olivia Wilde and Beanie Feldstein on set of Booksmart.

Long before audiences watched Beanie Feldstein and Kaitlyn Dever let rip in a final hurrah before college, before the Barbie drugs-trip scene, before Dever’s character was a lesbian, Booksmart was Book Smart, a screenplay on the Hollywood Black List 10 years ago that was going nowhere.

The very first iteration of what would eventually inspire one of the US indie critical darlings of summer 2019 and earn a Writers Guild of America original screenplay nomination was a story by Emily Halpern and Sarah Haskins about two overachieving high-school best friends who set out to find boyfriends in time for prom night.

Back in 2009 it was hard to get a female-led story off the ground, and the Book Smart script gathered dust. Then writer Susanna Fogel worked on the screenplay in 2014 and changed one of the girls — Dever’s character Amy — into a lesbian.

Times and attitudes were changing and more people began to pay attention. Megan Ellison’s Annapurna Pictures took a punt and bought the script. The champion of independent cinema was also developing the likes of Vice and If Beale Street Could Talk at the time so things slowed down again, but not for long.

In February 2016, then-Annapurna head of film production Chelsea Barnard hired veteran comedy producer Jessica Elbaum to see what could be done with Booksmart. Elbaum — the Bachelorette and Welcome To Me producer who also has Hustlers this awards season and is lining up the Toni Erdmann remake — works at Gloria Sanchez Productions, the female-oriented stablemate of Gary Sanchez Productions co-founded by Will Ferrell and Adam McKay.

It would prove to be a decisive move. Dever (Beautiful Boy, TV’s Justified, Unbelievable) was already attached and Elbaum asked her friend Olivia Wilde to read the script with a view to directing. “I was excited by the prospect of what I felt she could bring as a filmmaker. She had done some music videos but not a feature. It’s so cheesy but when you know, you know, and that’s how it felt with Olivia,” recalls Elbaum. “It was a similar thing when I worked with Leslye Headland [Bachelorette] and told her she should direct. I like to trust my instincts because, thank god, for the most part they’ve been right.”

Wilde loved Fogel’s script. “It was so fresh,” recalls the star of Tron: Legacy, Rush and current awards contender Richard Jewell. “I have a real love for this genre and for high-school movies and relationship films and I thought finally a love story, a platonic love story, about two young women. It isn’t about assimilation, it isn’t about competition.”

She pitched to Annapurna. Elbaum describes her presentation as “unbelievable” and Barnard and her cohorts were impressed. A key element of the proposal included a version of the celebrated Barbie-doll trip sequence, in which the self-respecting female leads accidentally ingest hard drugs and believe they have morphed into the plastic embodiment of male-gaze feminine orthodoxy they despise.

Wilde got the job. “I have to credit [Annapurna],” Elbaum recalls. “There aren’t many companies that would take a risk on a first-time filmmaker. As a producer, to be able to have a studio back that vision is very fulfilling.”

The feature debutante was overjoyed and determined to give it her best shot. In autumn 2017 she hired Katie Silberman (Isn’t It Romantic) to update the screenplay. Wilde picks up the story: “Katie had this incredible revelation during our first conversation and said, ‘What if all the other students are smart and it’s not just the two girls, and they realise everyone else was able to juggle school and a social life and they were actually the limited ones?’ I thought that was so brilliant. She and I rewrote together and we were off to the races.

“I was so excited to make the movie that I showed up in LA in January [2018] — I live in New York — and said we were going to make the movie in spring,” Wilde continues. “It went into pre-production and I told the studio to catch up, this movie has to happen now. We had to hire Beanie Feldstein [Lady Bird] to play Molly because I knew her star was rising and very soon we’d never be able to get her. Kaitlyn Dever was attached, which was one of the reasons I wanted to do the movie because I was such a fan. We hired Allison Jones to cast the movie; and the incredible cinematographer Jason McCormick. Very quickly it all came together and we were shooting by April. It lasted 26 days.”

Much of Booksmart takes place at night, and darkness became a precious commodity as summer approached. This, says Wilde, was the biggest challenge as they raced around various locations in the San Fernando Valley, north of Los Angeles. “I had to be so efficient,” the director notes. “We had about eight hours to shoot at night and it was an enormous amount to accomplish. I had an extraordinary AD named Scott Robertson who had worked with people like [Alejandro] Inarritu and was capable of handling much more challenging situations. I would joke with him any time things got a little stressful on set and say, ‘It’s not The Revenant though, right?’”

Wilde’s attitude informed the vibe on set. “I’ve never seen anybody with more energy and be more positive,” says Elbaum. “After we’d been going to bed at 9am, she’d be right back at it and was always playing music in between takes. It was fun for her. She was so good with the actors.”

Wilde sought advice from filmmakers such as Spike Jonze, for whom she played a small role in his 2013 feature Her, and Mark Romanek and Reed Morano too. Jonze proffered a memorable pearl of wisdom: “He said actors are like children. Take care of them but give them boundaries, make them feel safe.”

Because of time constraints, Wilde learned quickly to pare down scenes to their essence. “I like very simple storytelling. I expected everyone to be able to work with three takes and move on.” She was adamant about keeping the one-take Steadicam shots captured by Chris Haarhoff — the camera operator on Birdman — and also knew her Barbie scene had to be in there, tasking Silberman with finding a place for it in the script.

“I have a real love for miniatures,” she laughs. The two-minute stop-motion piece — in which Amy and Molly become dolls that are suddenly self-aware of their anatomically impossible bodies — took 30 animators from Portland-based ShadowMachine (the company behind Netflix adult animation BoJack Horseman) five months to make after the principal photography wrapped.

“We had a complicated dance there,” Wilde recalls, noting they had to create a miniature replica of a bedroom location in Los Angeles, and co-ordinate with cinematographers and production designers to match real-world and mini-world lighting and sets.

Ultimately all of Booksmart gelled into one satisfying and complete story. “It changed significantly with each writer,” recalls Elbaum. “Everybody brought their own vision to it. It’s not your typical high-school comedy. I feel I made a comedy that is resonating.”

Booksmart premiered at SXSW in 2019 and grossed close to $25m at the US box office through United Artist Releasing. Wilde is already in prep on her next directing feature, the New Line thriller Don’t Worry, Darling, which commences in early 2020.

For now, she hopes audiences will continue to enjoy what Booksmart has to say. “Society encourages us to value romantic relationships so much more than our friendships. [It suggests if] we do not have a romantic partner, we’re missing something in life. For young women, it’s important to encourage the respect and support among friends. There’s been far too much content encouraging a competitive relationship between women and we have to unravel that because it has pretty devastating consequences.”