Celebrating Sue Bruce-Smith: from Palace to Film4, how she made her mark

There were very few people as rooted at the epicentre of British cinema as Sue Bruce-Smith. Perhaps none. 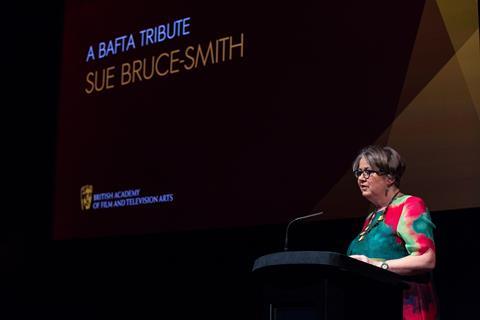 Sue Bruce-Smith at her Bafta tribute

Starting in the mid-1980s, she worked across finance and production, marketing, distribution and international sales on countless classic films, developing one of the most respected reputations in the business in the process. And unlike others, she always preferred to stay in the background, determined to help the numerous projects and filmmakers she was involved with if her input chimed but never seeking to impose her will.

Oscar-winning director Steve McQueen said as much to Bruce-Smith from the stage at the BFI London Film Festival in October 2018, dedicating the premiere screening of Widows, their fourth film together, to the executive. She works behind the scenes, he said, yet she has been an instrumental figure in all his films since his debut feature Hunger (2008).

The final part of Bruce-Smith’s career was as deputy director of Film4 and it is with the prolific film arm of the public broadcaster that she was most widely associated. But, like many stalwarts in the business, she started her career (in 1985) at Palace Pictures, the rule-breaking independent production company/distributor, which threw a grenade at the established way of producing and releasing movies. Working for current Film4 director, Daniel Battsek, she was initially print and bookings manager before taking on a marketing and distribution manager role.

“I was incredibly lucky to land at Palace,” she recalled. “Everyone was hugely inventive and questioning of the orthodoxy, which made it a dynamic and pretty anarchic environment, filled with highly creative people. I’d go as far as to say that many of their subsequent careers have been strongly informed by that time.”

Bruce-Smith recalled going up onto the London Hippodrome stage dressed as Freddy Krueger to promote A Nightmare On Elm Street (“complete with gruesome clawed glove,” she laughed), or parading outside Harrods in a sweaty Critters costume (for its 1986 release). “Daniel left no stone unturned in our marketing campaigns,” she said, citing such classics as The Evil Dead (1981), The Company Of Wolves (1984), Letter To Brezhnev (1985), Hairspray and High Hopes (both 1988).

But in 1989, Bruce-Smith changed tack, taking the role of head of international sales for the British Film Institute’s production division, where she worked on more esoteric titles, such as Peter Greenaway’s The Draughtsman’s Contract (1982), Terence Davies’ Distant Voices, Still Lives (1988) and Derek Jarman’s The Last Of England (1987).

In 1993, she went over to BBC Worldwide, determining its investment strategy in feature film production and encouraging a worldwide theatrical life for such films as John Madden’s Mrs Brown (1997), Stephen Frears’ The Snapper (1993) and Roger Michell’s Persuasion (1995). Mrs Brown, originally conceived as a television movie, went on to be a huge global theatrical hit, landing Judi Dench her first Oscar nomination and initiating the relationship between Miramax and Madden.

Bruce-Smith spent four years at Film4’s international sales department, joining in 1997 and working with ex-Palace colleague Paul Webster, before leaving in 2001 to move to Dublin with her family. Here, she joined independent production outfit Little Bird, and oversaw production of Brad McGann’s In My Father’s Den and Marc Evans’ Trauma (both 2004).

But in 2004, she was intrigued to get a call from Tessa Ross, who was spearheading a new incarnation of Film4, asking her to rejoin the team as head of commercial development and distribution. The role offered a way back to public service filmmaking, which she was instinctively drawn to with its sense of remit and social purpose.

It heralded a golden era at Film4 thanks to the creative genius of Ross and the calibre of the creative teams she put in place, most recently exemplified by Rose Garnett. Bruce-Smith was very conscious of benefitting from the quality of the films she was able to work on, and from the strong talent relationships Ross had nurtured with such filmmakers as Danny Boyle, Shane Meadows, Lenny Abrahamson and Martin McDonagh.

After Daniel Battsek joined Film4, he promoted Bruce-Smith to deputy director in 2017, and she became more passionate than ever about the Film4 mandate of making bold and resonant cinema in a period of such immense change for the industry. Not to mention working with “a truly great team of people”.

Bruce-Smith was integral to the strong relationships Film4 has with all of its industry partners, from the studios to producers, financiers, sales agents and independent distributors, ensuring that each project found the best home. She noted: “As content across small screen platforms becomes more homogenised and risk-averse, it’s more important than ever that the distinctive work that Film4, BBC Films and the BFI support is seen on the big screen in the way that the filmmaker intended.”

And, as many in the industry will attest, she continued to offer guidance and mentorship to colleagues at all stages of their career. So what advice did Bruce-Smith – whose own career encompassed so many different aspects of the filmmaking world – give to newcomers?

“Don’t be afraid of embarking on something new that you know little or nothing about,” she smiled. “Throw yourself into the work, ask plenty of questions and make sure you work with people who both inspire you and bring out the best in you.”

Note: This is an updated version of a piece written by former Screen International editor Mike Goodridge for the Bafta tribute to Sue Bruce-Smith held on January 18, 2019. To read the original piece and the full tribute brochure, click here.