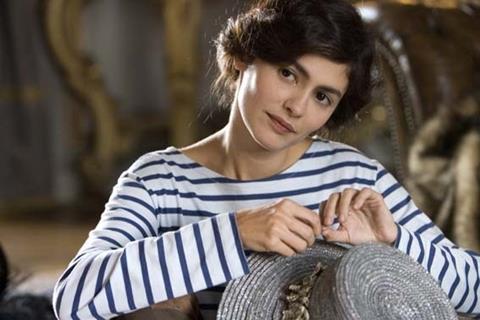 Anne Fontaine’s tenth feature and first period film, Coco Avant Chanel promises to be her biggest box office draw yet, largely thanks to Audrey Tautou’s splendid performance as the headstrong, self-sufficient French designer who, in pre-First World War France, was one of the first women to assert herself in a man’s world.

With a 19.4 million euros ($26million) budget, Coco Avant Chanel goes out on April 22 in France through Warner Bros on about 530 prints - one tenth of the nation’s screens - to accommodate widespread interest bolstered by extensive feature coverage across all media. The French dislike being marketed to, but the danger that over-promotion might backfire should be offset by curiosity about a national icon with global prominence, and a certain affection for Audrey Tautou.

Internationally, the film will roll out in 60-70 territories from April to October with Sony releasing it in the US in or around September with print numbers still to be decided. Optimum will release in the UK sometime in June and only China, India, the Middle East and a few territories in Asia have yet to be sold.

Born poor in 1883 in rural France, Gabrielle “Coco” Chanel overcame her lack of breeding via a keen eye, forthright manner and revolutionary approach to women’s tailoring that, incredibly, transformed a gruff peasant girl into the embodiment of chic. The iconic innovator lived to be 87 but Fontaine wisely concentrates on the stretch of time specified in the title, as Chanel scrambles to get by, absorbs visual inspiration from her surroundings (the nuns’ habits, military buttons, a fisherman’s knit shirt, etc.) and unabashedly uses men to get closer to Paris, a destination she doesn’t reach until 85 minutes in.

Abandoned by her father after her mother dies and raised in a convent orphanage, Gabrielle Chanel came from hardscrabble roots and, from all reports, remained surly and abrasive despite her eventual success. Save for the early lesson that loving a man leads nowhere and a basic introduction to sewing, the film dispatches quickly with her childhood, cutting to Gabrielle and her sister Adrienne (Gillain) supporting themselves in the provinces.

Kept by one man, wealthy playboy Etienne Balsan (Poelvoorde), on whose country estate she observes the mores of moneyed men and demimondaines, she then falls for another, Englishman Arthur “Boy” Capel (Nivola speaking expressive, lightly accented French).

Possessed of a lean, slightly androgynous figure in an era when curves were all the rage, Chanel is always seen undoing other women’s corset stays, loosening seams and adapting men’s clothing for her own wardrobe.

Chanel’s first real step toward her calling comes when vivacious Emilienne (Devos), Balsan’s former mistress and a successful comic actress, dons a Coco-made straw boater, launching her as a maker of hats that are flatteringly simple at a time of wild extravagance.

The screenwriters have taken liberties with chronology that may upset fashion purists but the broad outline of alliances, influences, lucky breaks and tragedy rings true. (Chanel herself often embellished stories about her origins, childhood and young adulthood.)

Bearing a striking resemblance to the real woman, Tautou communicates Chanel’s emancipated, fearless approach to life and her steely resolve (she barely cracks a smile during the first hour), while letting subtle layers of hurt, humiliation and grief show through her pride.

Poelvoorde, whom Fontaine gave his first serious role in In His Hands, is an inspired choice as Balsan. Alexandre Desplat’s unobtrusive but compelling score builds gradually while vet Catherine Leterrier’s costume work is exemplary and Chanel’s penchant for black and white, her trademark quilted handbags and other hallmarks of her lasting creativity are subtly woven into the proceedings.

Slight confusion may arise from the perfunctory role Coco’s sister is assigned - is she really her sister or just a good friend? - and the ending, although moving, may strike some viewers as unnervingly abrupt. But these are quibbles.

Anne Fontaine, Camille Fontaine in collaboration with Christopher Hampton and Jacques Fieschi, based on L’Irreguliere by Edmonde Charles-Roux