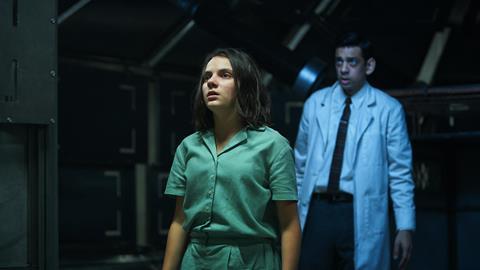 2018 Screen Star of Tomorrow Dafne Keen tells Screen about her starring role in Bad Wolf’s adaptation of the Philip Pullman fantasy novel series His Dark Materials, and growing up on screen.

You have completed filming on the second series of His Dark Materials. How would you say Lyra has grown and changed as a character?
We leave off season one with her just having been abandoned by the only person who has ever loved, who’s ever been her family. She was an orphan, but her only family was Roger [played by Lewin Lloyd] and now he is gone. And it’s partially her fault. So we began season two with a heartbroken Lyra alone in this new world. These parents that she thought her entire life were dead, but were good people, she’s discovered that they have tried to kill her best friend.

She’s discovered that she’s completely alone. That’s basically where we start, and I think the entire point of Lyra in season two is trusting again. We start season one with Lyra being very adventurous and trusting everyone, and then she gets smacked so many times in the face by life that, by season two, she doesn’t trust anything. I think that’s where Will [Amir Parry] comes in and basically opens her up to love and trust again.

Do you think the tone of the series has changed?
Definitely. Season two I personally think is better than season one. Filming it, it felt much darker. I think we all, as actors, have got much more into the characters. In season one, we were just sort of figuring the out, but now we can play around more. The thing that you will really see is that there is more blood, more death. It’s more morbid. More raw.

The role of Lara is also quite physically demanding. How do you prepare for that?
I am a very kinetic person, so I’m constantly moving. I just had a great time with it. With season one, the hardest thing was just running in the heat. I can’t deal with heat, even though I’m Spanish! But we were quite lucky with season two because there wasn’t a heatwave this year. [The show is shot at Bad Wolf Studios in Cardiff, and locations across the UK.] But there was quite a lot of running and obviously there are a few fights.

I’ve been doing aerial silk since I was six years old, and I see stunts and fights more like a dance than fighting. I have danced my entire life. I did classical but I got bored of it; then I went into contemporary and that wasn’t sassy enough for me. My mum used to be a salsa teacher, so she’s teaching me salsa at the moment. As a Latin girl, music has really been involved in my life. When I was little, I used to get really mad with these terrible tantrums. And my Mum would be like, “Dance it off!”

You have worked with some incredible people: Hugh Jackman in Logan and, in His Dark Materials, Lin Manuel Maria, Ruth Wilson, James McAvoy. What have you learned from them?
Hugh was a real turning point for me. I think the biggest thing that he’s taught me is just being humble. I remember every single Friday on set [Keen played young mutant Laura in the 2017 X-Men spin-off Logan], he got lottery tickets and he’d pass them around and be like, “Happy Friday, Lucky Friday to everyone”. And I asked him once, “Why do you do this?” He said, “Because as an actor, you’re in front of the camera and everyone’s paying attention to you and you don’t get a chance to meet everyone. I really want to be able to get to know everyone and give them thanks, because without them it’s impossible for this film to be made.”