The streamers, led by Netflix, dominate the TV Globe nominations, which mix some returning names with plenty of new contenders. 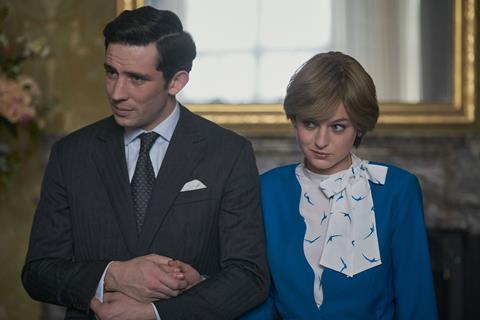 The Golden Globes’ TV categories are famously unpredictable. And this year the field was more open than ever, given that most of last year’s winning series had either ended their runs or delivered no new episodes in the US during the 2020 calendar year eligibility period.

The upshot was a nominations list mixing a few familiar names and titles with plenty of new entrants and a couple of notable omissions, a list that provides few pointers for other major TV awards announcements coming later in the year.

The Crown and its stars got the biggest share of kudos, the fourth season of Netflix’s UK drama claiming a total of six Globe nominations. Other series with multiple nominations included Schitt’s Creek with five, Ozark and The Undoing with four apiece, and The Great and Ratched with three each.

In the best drama series category, The Crown (last a winner in 2017) goes up against awards regular Ozark and new contenders in Disney+’s The Mandalorian, HBO’s Lovecraft Country and, most unexpectedly, Netflix’s Ratched.

Succession, last year’s winner in the category, was not eligible because of Covid-19 production delays on the HBO series’ third season. And notably missing was Netflix’s Shonda Rhimes-produced hit Bridgerton, a show that seemed almost tailor-made for Globe voters.

In the competitive limited series category (which also covers anthology series and TV movies), UK shows Normal People (from BBC and Hulu) and Small Axe (from BBC and Amazon) scored nominations alongside HBO’s The Undoing and Netflix’s The Queen’s Gambit and Unorthodox.

In perhaps the Globes’ biggest snub, however, the BBC and HBO’s widely acclaimed I May Destroy You missed out on a limited series nomination, a non-inclusion that has renewed criticism of the HFPA. Last year, the omission of When They See Us and Watchmen from the nominations led to a #GlobesSoWhite backlash.

As awards season unfolds, the Globe nominations bode well for The Crown and its cast, and the omission of I May Destroy You could spur other groups’ voters to lend even stronger support to that show.

Nominations for the Bafta TV awards are not announced until late April, however, and though the group has the same eligibility period as the Globes (with the Globes requiring a US screening during the calendar year and the Baftas a UK showing), it has different nationality requirements. Of this year’s Globe-nominated shows, only The Crown, Normal People, Small Axe and Killing Eve (which gave an acting nod to Jodie Comer) qualify for the main Bafta categories. The likes of The Great, Lovecraft Country, The Mandalorian, Mrs. America, Ozark, The Queen’s Gambit, Ratched, The Undoing and Unorthodox are all competing in Bafta’s crowded international category.

While the Primetime Emmys have similar nationality rules to the Globes, their eligibility period is from June 1 to May 31 (with nominations announced on July 13). As a result, current Globe nominees Unorthodox and Normal People, for example, have already had their Emmy runs. And by the summer, Emmy voters will have many yet-to-debut shows to consider, including, perhaps, the delayed third season of Succession, 2020’s best drama Emmy winner.