How the film industry can best embrace online pitching 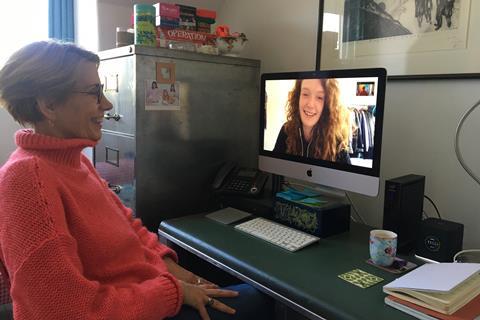 With most of the world in lockdown, filmmakers are being forced to ‘officially’ pitch at industry events that have moved online such as Visions du Reel, Frontieres, Sheffield Doc/Fest, plus many more in the coming months. And of course, informal pitches are happening in digital meetings every day.

Even after this crisis is over, these virtual meetings are going to be part of the “new normal” throughout the industry. But how does an online film pitch differ from an in-person pitch?

Lisa Marie Russo, BFI Doc Society fund executive, and her colleagues at online events (such as CPH:DOX and the upcoming Sheffield and Hot Docs) are well versed in interviewing filmmakers online for funding applications. “It’s important that both the producer and director attend the meeting, as we like to talk about all aspects of the projects,” she noted. She said it’s important to remember the people on the other side of the screen “are real human beings on the screen, juggling family responsibilities as well as being on the front line of filmmaking. We really don’t stress about children popping into the room.”

Some people are adroit at remote meetings already. UK-based script consultant and screenwriter David Pope also works with training initiatives such as Stowe Story Labs and Rotterdam Lab. “I work very much internationally as a script consultant and screenwriter and this mode of working has been very much established in the development end of the value chain for quite a while,” he explained.

He says the current lockdown might have the silver lining of more opportunities to connect globally. “I hope that during the new normal everyone takes the opportunity to reach out internationally and keep building relationships. For areas of the industry that relied heavily upon the annual markets to meet I hope that they are able to utilise the technology to keep the wheels turning. Also for filmmakers who may not have the economic resources to attend overseas industry events, this is an opportunity to engage in a different way and I hope that funders and commissioners embrace that.”

Still, UK producer Vaughan Sivell of Western Edge Pictures said that sometimes a video meeting isn’t ideal for first introductions. “The better you know the other ‘callers’ the easier it is - as in face-to-face meetings too.” And knowing when to talk and when to listen is still a skill most people are developing, he added: “It’s like a game of ‘conference-call-chicken’ where you pick your moment to try and speak without interrupting someone else - always politely giving way! So, with new people that can be a tad more awkward.”

New York-based producer Anne Hubbell of Tangerine Entertainment has been doing Zoom meetings with agents, managers and sales companies, and admits sometimes she prefers phone calls. “Video conferencing can mean technical glitches, self-consciousness about one’s own appearance and the distraction of seeing other people’s homes can take away from the business at hand.”

For those industry experts listening to online pitches, they should also have smarter, more focused behaviour. Canada-based pitch consultant, development expert and consultant Jan Miller notes: “It’s key that they prepare for the pitch as their sole focus for that 20/30 minutes. I think that it would be easy to get distracted by phone calls or messages coming in which would be disruptive for the pitch.”

Annick Mahnert, the newly appointed market director at Montreal-based genre forum Frontieres is preparing to take that influential market and its pitches online for the first time. “It won’t replace a physical meeting because I do believe that physical interaction is key to collaboration, but at least it will allow professionals to exchange about content and create new relationships.”

Mahnert added: “We are currently exploring various solutions to ensure that the pitches and materials provided will be shared with the industry in a secure way. Collaboration is key. I’m already exchanging with other markets about how they are imagining their industry events. There is new technology out there that makes our transition much easier. But we need to learn how to use software within days and being able to rely on other people’s experiences helps to achieve our goals much quicker.”

One pioneering event that other festivals are learning from is CPH:DOX, which had to move its festival and industry activities online in a matter of days, when the Danish government shut down physical events in mid-March. CPH:DOX’s CPH:FORUM usually offers in-person, on-stage pitching in front of hundreds of industry experts.

When CPH:DOX had to suddenly move online, the FORUM held more than 450 bespoke meetings between projects and industry experts, but decided against including a formal pitching element. CPH:DOX head of industry Katrine Kiilgaard explained: “We very early decided that we would not do one long pre-recorded pitch “show”, as we feared that it would not be engaging enough. Being hooked on the live element, we didn’t find the technical solution that would allow for us to be able to show trailers as part of the pitch in a good enough quality to a defined and exclusive audience in a secure broadcast. Instead pitch teams got the opportunity to pre-record a pitch themselves that we would make available in a password protected area with the trailer and basic information about the project and its financing status. If they didn’t want to do this, they would pitch the project in every meeting.”

As Netherlands-based pitch and public speaking coach Bonnie Williams notes, some aims should be constant whether online or offline: “Although pitching opportunities and settings are rapidly changing, the underlying rules and dynamics really aren’t. You have a goal. You’re on a mission. You want to make an impression and you need to make a connection.

Online pitching tips from the experts

Be well prepared and find the right energy. Be confident. It is a lot about energy. I think energy works as good digitally as it does live.

Have a script and rehearse, rehearse and rehearse. Work with body language to get the pitch into one’s body.

The level of comprehensibility should be so simple that a three-year-old can understand you.

If you have a really good clip you can start with that, but usually the personal pitch should come first and then you can later show pictures and film clips.

A pitch should always have three dimensions :

1) POSITION: Who are you, where you sit in the industry eco-system, what have you done worth bragging about, what can you promise for the future?

2) PROJECT: Find the core of the story and pitch that. Less is more. You don’t have to explain everything: your job is to make those who listen curious. Further details can be explained in later, one-to-one meetings.

3) DIRECTION: What stage is your project at? What are you looking for? What do you need? What’s your next step?

Keep sentences short and to the point - it helps people comprehend and take in more.

You will need a computer for the online connection, but don’t read your pitch content from that computer. I really recommend that you don’t fall into the trap of reading… it’s not good in a live pitch and the same applies online.

If you’re in a Q&A, be sure to answer the question they asked – not the one you wished they’d asked. A lot of politicians do that.

End the pitch by asking what you can send as a follow-up: the one-pager, a look book.

As with pitching offline, rehearse, especially if unfamiliar with

the conferencing platform. I think recording an online rehearsal pitch is a double-edged sword and will be useful to some and not to others.

For a while now, the use of materials such as lookbooks, pitch decks and other visual or audio-visual assets have been used to augment verbal pitches. These have usually been sent before or after the meeting unless the pitch is happening in the presentation environment with a large screen or projector. With the screen share functions of many online conferencing tools, these visual elements can be introduced effectively at appropriate points in the pitch. This needs to be carefully rehearsed but could make very effective use of these assets screen to screen.

Be prepared, everybody else will be.

See the camera as a channel of communication linking you to your viewer. Project that person onto the other side of the lens and talk directly to them, looking right at them, so to speak.

When you speak, remember you’re talking to an individual, because they watch it individually. You can connect with them if you stay connected to your project, your personal drive and your goal: how you want them to receive your idea.

Even though you’re not in the same room, you are in the same virtual space with your viewer, so don’t try to act or perform. They’ll sense it.

Practice with a director, or show it to a trusted outside eye, to ensure that you’re understandable and come across how you intend to.

Technical tip: Take into account the possible attention span and eye focus of the observer. You don’t want to talk their ear off or stare them down.