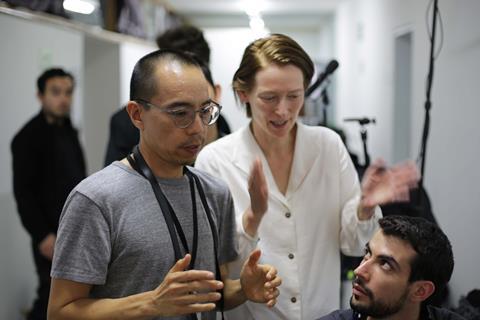 Apichatpong Weerasethakul and Tilda Swinton, on set of ‘Memoria’

After a six-year break from making features to focus on art and short films, Apichatpong Weerasethakul has returned with Memoria, Colombia’s Oscar submission which shot in the South American country from August to October 2019 with the support of Proimagenes Colombia.

The Spanish and English-language drama with mystery and sci-fi undertones is the first of Apichatpong’s nine features to shoot outside his native Thailand. The filmmaker had been intrigued by Colombia and got to explore the region after he presented a retrospective of his films at Cartagena Film Festival in 2017.

A meditation in part on how land and people carry lifetimes of collective experience, Memoria stars Tilda Swinton as Jessica, a Scottish woman who travels through Colombia to discover the origin of a mysterious sound within her head. The film premiered in July at Cannes, the scene of Apichatpong’s 2010 Palme d’Or triumph with Uncle Boonmee Who Can Recall His Past Lives, and won the jury prize. Neon is distributing it across the US one screen at a time, with no plans to release on DVD or digital platforms. The Match Factory handles international sales.

Screen International: Apichatpong, why did you decide not to shoot Memoria in Thailand and how did it feel shooting in a foreign country in a language that isn’t your native tongue?

Apichatpong Weerasethakul: The political situation in Thailand has been quite tense since the 2014 military coup and the military-backed government at present. I cannot make the film I want to make here. Colombia allows me and Tilda to be strangers, to operate with the idea of not knowing, with open senses. During the shooting, I felt at ease with the flow of Colombia, with tremendous support from local crew. The experience of shooting there has showed me the universality of human emotion. It’s quite reflective to how I approach my past films in Thailand.

I gather you experienced a similar inner sound to the one Tilda’s character Jessica hears in the film.

Apichatpong: Yes, it was before my Colombian trip and during. It wasn’t traumatic like in the film; it was something very curious for me to hear but I was aware it wasn’t a sound but something in my head. So like Jessica in the film, there was this attempt to translate it.

Had you already conceived of the film or was this something that motivated you to tell the story?

Apichatpong: I went to Colombia several times in chunks of time and slowly the film started to emerge from situations, from stories that people shared with me.

Tilda Swinton: But even before that, we had this very open and relaxed idea of making a film with absolutely no prescription about narrative or even place, about a kind of atmosphere of receptiveness, a sort of suspension. We had this agreement to make a film about that atmosphere. All the details of things that might happen in the film started to come once Colombia started to give it all up.

Jessica seems so adrift and is unlike any character you’ve played. She’s also an outsider, like yourself and Apichatpong in Colombia.

Swinton: First of all, we’ve never described her as a character. That’s not a word that I’m ever comfortable with simply because I’m not so interested in character; I’m much more interested in people, in situations. We made very clear from the start that it was going to be an opportunity to paint a portrait of somebody who is divested of any detail. She’s not even a social being. She’s a receiver.

As we discover, she’s in this sort of limbo… She’s a foreigner but she’s not a tourist. She lives in Colombia but she’s not Colombian. When we first meet her, she’s sleeping in a room that isn’t hers and the first thing we know about her is that she experiences this bang and it’s in many ways a mystery story. It’s someone following this breadcrumb trail through the forest to find out what is this sound.

The scene with the sound recordist, where Jessica is trying to recreate the sensation, almost plays like a thriller.

Apichatpong: It was from the reality of trying to find this sound in my head. I worked with my trusted sound designer [Akritchalerm Kalayanamitr] trying to get it and that’s what it is like in the film. We discovered sound-effect libraries from movies and we manipulated sound. The whole thing is about bringing the audience into the mixing room and exposing the process.

Jessica speaks Spanish in the film. Are you fluent?

What was your filming process?

Swinton: We shot chronologically. The shoot was fairly laborious and we travelled around Bogota with a relatively elaborate crew and we travelled into the mountains. We had a structure but at the same time within that architecture the trick was to keep it fresh, and to keep us in a state of not knowing what we were doing, which we both cherish.

Apichatpong: When you don’t know, you really listen and you open your eyes, your heart to any possibility. Shooting chronologically is important because we discovered this character bit by bit… She’s not ahead, she’s alongside you.

I gather you had wanted to work together for some time.

Swinton: I can remember [seeing] Tropical Malady in 2004. I felt I had found cinema kin and the idea of calling him a colleague was a magical one and I hoped it might be true. He was really a brother to me. The kind of free space that he offered me was unique. I had it a long time ago with Derek Jarman and then unfortunately he left the building and I hadn’t had it in the same way since.

Apichatpong, what was it like to work with Tilda?

Apichatpong: I treasure the time of filmmaking as much as the film itself, and I like to spend time with her. We share our love of cinema and a particular kind of cinema. In the end, it’s not work, just pleasure.

What do you think about Neon’s distribution plan?

Swinton: We’re so proud and grateful because we feel this vision not only dignifies our film but also dignifies cinema. It is possible for films to get lost these days.

Apichatpong: It is a way for the film to reach more people, actually. You just need to be patient and wait for this film. We will go to a town near you… we just ask the audience to bear with us and to trust us.

Swinton: And to look forward… we don’t think anything of buying a ticket for our favourite band that might be coming to our city. We get that ticket, we stick it on the fridge behind a magnet and we mark the date in the calendar. That’s all we’re suggesting — that, yeah, the experience is going to be worth it.

What are we to make of the extraordinary sequence that tips its hat to the sci-fi genre?

Apichatpong: There are many possibilities [of interpretation]. I don’t know if it’s in the future or in the past but it’s the moment when time collapses… the sound design is full of memories and recordings. It’s a tribute to many science-fiction writers I read when I was 15 and to the illustrations on the covers.