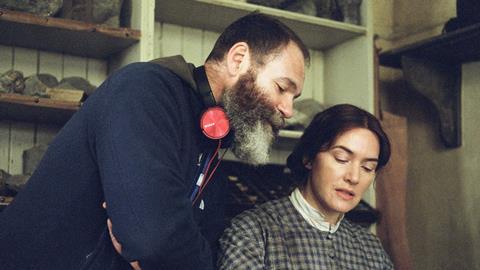 Kate Winslet delved deep to play 19th-century fossil hunter Mary Anning in Francis Lee’s romantic drama Ammonite. The actress tells Screen why getting dirt under her nails was necessary for the performance

Kate Winslet got her hands dirty – literally – with her role as 19th-century fossil hunter Mary Anning in Francis Lee’s Ammonite.

To portray Anning, she was actually digging through sand and mud. The close-ups of weathered hands with dirty fingernails are Winslet’s. As are the close-ups of those same hands doing detailed drawings of fossils – Winslet indeed learned how to draw intricate fossils as well as picking up Anning’s elegant handwriting style.

“You can see the wrinkles on the back of my hands, you can see the translucency in my face and neck when it was cold,” says Winslet. “Everything felt so raw and real.”

Anning was not a polished society woman; Winslet’s hair is wild and she is digging in mud and hitching up her skirts to relieve herself on a beach. “Her life is hard, I appreciated that we weren’t seeing a rosy glow,” she says. “I don’t believe that actors should look glammed-up and glossed-over, especially in period films.”

Winslet dedicated herself to finding out all she could about Anning’s world, spending time in her hometown of Lyme Regis (on the Dorset coast of south England) not just to nail the local accent but also to go fossil hunting herself.

“Mary Anning is a woman who is so different to me, she barely moved her hands apart from to work,” she says. “She was less overtly emotional than me – that was quite difficult for me to get into.”

The actress lived in a cottage on her own during the film’s production. “I needed to create an emotional bunker,” she explains. “I couldn’t have come home and cooked dinner for my family or fed my dog every night. I had to do many things to understand her rhythm. I spent my nights drawing or chipping away at my ammonites.”

Winslet, of course, has her pick of high-profile roles but it did not faze her to work on a lower-budget film with a director on only his second feature. She had seen and loved Lee’s 2017 debut God’s Own Country, explaining, “It was my kind of film, it had a rawness and purity to the story. There is not a lot of exposition and explanation, you’re seeing these two people come together. And the visual poetry of Francis’s work I just found staggering.”

“Francis and Kate had a meeting of the minds,” recalls Iain Canning, who produces Ammonite alongside his See-Saw Films partner Emile Sherman, with Fodhla Cronin O’Reilly. “She is a very experienced actor and she’s been on so many film sets of so many scales and sizes, and this was only Francis’s second feature, but you never felt that difference in terms of how much Kate respected Francis in terms of being an artist and how Francis respected Kate as an actor.” Canning adds the whole crew could “feel Kate’s joy” when she found a real fossil one day while cameras were rolling.

Ammonite – which was backed by BBC Film and the British Film Institute – was rewarded with selection for the Cannes 2020 label, and then by the Telluride and Toronto film festivals. Neon released in the US in November, while Lionsgate has UK rights. 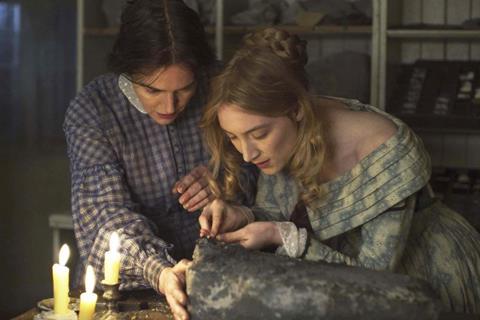 While in production, the film attracted some complaints from Anning’s distant relatives – she has no direct descendants – for its depiction of their family member in a lesbian relationship, with a younger married woman named Charlotte Murchison, played by Saoirse Ronan.

Winslet thinks the film is stronger for it. “There is no historical information about Mary Anning’s personal, private world – she never married – so we had a bit of freedom in terms of inventing our version.

“I love that Francis chose to pair her with a woman,” she continues. “Because she was living in a world that was dominated by the patriarchy, it wouldn’t have felt right to have her in a relationship with a man.”

Winslet had researched letters that close female friends had written to each other in the mid-19th century, some of which tipped over into sexual relationships. “I read a lot of letters from women at that time – these women were in marriages but it was not uncommon for women to form these deep friendships, their bonds were tight.”

Back in 2019 when Ammonite was shooting, hiring an “intimacy co‑ordinator” was not yet standard practice. The sex scenes were something Winslet, Ronan and Lee talked about and choreographed together. “It was important to us not to shy away from the real sexual, visceral emotional connection between those two characters,” says Winslet. “That is so layered throughout the film, and it really does build to that moment of physical connection.”

It marked the first time the two actresses have worked together. “I’ve admired her forever,” says Winslet of Ronan. The pair had different approaches, explains Winslet: “Saoirse is an incredibly gifted actor. There is a lot that comes naturally to her, where I have never trusted myself to allow things to just come to me on the day. I do a lot of preparation. I’m quite organised. I label things and I have a sticker system, and Saoirse would find that hilariously funny.”

Winslet — who will next be seen in HBO miniseries Mare Of Easttown, playing a detective in a small Pennsylvania town investigating a murder, and has shot James Cameron’s Avatar 2 — hopes audiences do not pigeonhole Ammonite as an LGBTQ story. “I hope they just see a story that is about two people who fall in love, and they discover more about themselves than they do about each other,” she says. “Who we choose to love can end up defining who we are, and that’s a good rallying cry for 2021.”