Martin McDonagh on the real-life inspiration behind 'Three Billboards Outside Ebbing, Missouri'

Writer/director Martin McDonagh tells Screen about the origins of his small-town revenge comedy-drama Three Billboards Outside Ebbing, Missouri, which was co-financed by Fox Searchlight and Film4. 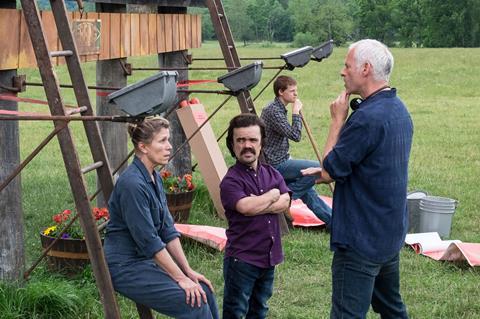 With Three Billboards Outside Ebbing, Missouri, his third feature after In Bruges (2008) and Seven Psychopaths (2012), UK-Irish playwright-filmmaker Martin McDonagh moves from the world of hitmen and Los Angeles gangsters to rural, small-town America to tell the tale of a grieving mother trying to shame her local police department into solving her daughter’s brutal murder.

Like much of McDonagh’s work for stage and screen, Three Billboards deftly balances its comedic and dramatic elements, emerging as the writer-director’s most rounded work to date thanks in part to sterling performances from Frances McDormand as the righteously vengeful Mildred and Woody Harrelson and Sam Rockwell as the town’s police chief and violent, bad-egg cop respectively.

Produced by Graham Broadbent and Peter Czernin of Blueprint Pictures, who also produced McDonagh’s previous two features, the $15m film was co-financed 50/50 by Fox Searchlight and Film4 — one of the first productions greenlit under then-Film4 head David Kosse as part of his strategy for the company to take “bigger swings” in the marketplace. While the fictional town of Ebbing was situated in the Missouri Ozarks, Three Billboards shot in Sylva, North Carolina for 33 days in May and June 2016.

The film premiered at Venice Film Festival in September, where McDonagh was awarded the best screenplay prize, before taking the audience award at Toronto International Film Festival. During this awards season, it has already garnered nominations for six Golden Globes (including best motion picture drama, and director and screenplay for McDonagh) and four Screen Actors Guild Awards (for the three principal actors and outstanding cast). Released in the US on November 10, it had grossed $21.4m for Searchlight at the time this issue went to press; UK release is January 12. Screen International met up with McDonagh at the Soho Hotel in London.

Was making a film with a strong female lead character a driving inspiration for Three Billboards?

That was a large thought behind it. I had done strong female parts in my plays but not in films. Film people only remember your films so it felt like no one knew I can write a good female character; I thought, “I’m going to change that.” I tried to create not just a good female lead but an outrageously different one. So that was part of it, but I also saw something similar to what’s on the billboards in the film about 20 years ago when I was on a bus through one of the southern states. This sign flashed by and it stuck in my mind, just bubbling away… the pain and rage and sadness of the person who would put that out there.

How similar was it to the signs Mildred puts up?

Very similar — calling out the cops, and graphic about the crime. I never was able to find out what or where it was but I decided it must have been a mother. So Mildred literally just popped out, fully formed — that pain and the bravery to go out of your way to stand up to the police publicly.

You mentioned your bus journey across the South. Have you travelled much around the so-called ‘red states’?

The last two years especially, when I wasn’t sure where we were going to shoot the film, I was doing a lot of travelling around. I went to Missouri, as far west as Colorado and New Mexico, but also Alabama, Mississippi, Georgia, Ohio. Because I’m a film fan, especially of 1970s American movies, every little town I go to feels cinematic. And I just listen to people and observe — the more you do that, the less judgmental you become about red states and blue states and all that kind of stuff. Hopefully the film is not judgmental about any of the people in this small town. It’s not a European’s comment on America at all.

How difficult was it to find the right balance between the comedy and the drama in the narrative?

Basically, it’s on the actors to commit to the truth of each moment rather than standing outside the character. If that happens, you’re onto a winner. So you just make sure you work with the best actors around, and your only job as a director is to keep an eye out for when it’s not going that way. There wasn’t an awful lot of direction to give these actors because they’re all good and you’ve talked about the script in the month before you’ve shot it. So on the day, you just let them go.

All three of your stars are very adept at both the comedic and dramatic aspects.

The trick, of course, is to play it as deadpan as possible. Frances especially — it’s all deadpan. She smiles twice in the whole film, I think. Sam had a lot more comedic stuff to play with, and there were two or three scenes cut out that were really good fun and really well done on his part, but they just pushed the balance too much towards comedy.

Was Sam’s character Dixon the trickiest to write due to the size of his character’s story arc?

Not really, no. Characters like that are joyful to write… well — he was a joyful racist character to write. But Sam gave us everything we needed for the edit; Sam did all that work. He captured the outrageous brutality of the character and he was smart enough to put in all those details, like the change in hairstyle when he gets fired and starts to shape up a bit. All those little things I wouldn’t have even thought about. That’s the thing, you get the best actors because they’ll take care of half your job for you. It’s Frances’s story and she knocked it out of the park, but in the edit Sam was the most surprising pullout of the whole thing. It became the story of two people changing.

Frances asked you to write a character for her when you first met nearly 20 years ago, but is it right she turned down Mildred when you first offered it to her?

Yes, both of those things are true. As soon as I started writing Three Billboards, she was the voice in my head. But when I sent it to her, her issue was about her age and [playing] a mother of a 19-year-old daughter. She didn’t want to pretend like she isn’t the age that she is [McDormand was 58 when she shot the film] and she wanted me to make Mildred a grandmother. I’m not someone who ever makes those kinds of changes. I finally managed to convince her.

It’s the third time you and Blueprint Pictures’ Graham Broadbent have worked together. You’re also a producer on the film. How involved do you get in the business side?

Graham takes care of all of that stuff, to be honest. We have a game plan going into financing about the amount of interference they’re allowed or not allowed to have.

Where is the line drawn?

Have you had offers to turn any of your plays into films?

I was always determined that would never happen because most plays are shit films. I challenge you to tell me a good film that’s been made from a play. You’re never going to win doing that and, yeah, that’s never going to happen.

Are you currently working on any other film projects?

I wrote a new play this year which will be on in London next year [A Very Very Very Dark Matter, about Hans Christian Andersen, at Nicholas Hytner’s Bridge Theatre]. And I’ve got one film script that’s kind of ready to go but I don’t want the next film to be any lesser than this one. I want to write another couple first and make sure the one I choose to make next is of that same standard.