The head of France’s mk2 film empire tells Screen why he believes cinema and culture can help change the world. 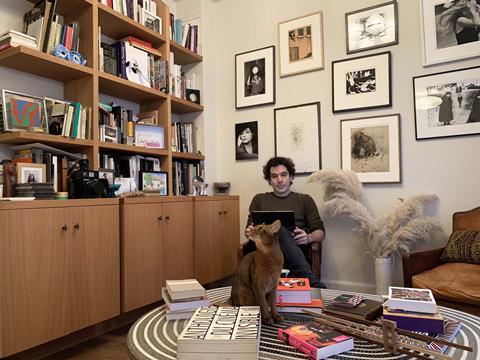 The 200 screens of mk2’s 26 cinemas in France and Spain may have been dark for a large chunk of this year due to successive Covid‑19 lockdowns and restrictions in both countries, but the company’s Paris-based managing director Nathanaël Karmitz professes to have been busier than ever.

Since March, the company has created the home film festival (Festival à la Maison); launched mk2 Curiosity, one of France’s first AVoD platforms, which makes five titles from its catalogue available for free each week; kicked off the first season of the mk2 Institut; and, when the curfew was introduced in October, changed its traditional schedules to run 8am screenings with complimentary coffee and croissants.

What’s your most significant moment of 2020?
The announcement of the first confinement in March. We had a few hours to shut up and leave the office. But beyond the lockdown, what will stay with me is how the company reacted and got several new initiatives up and running during this period.

What is the mk2 Institut?
It’s a passion project. It involves high-level intellectual conferences that take place in our theatres. Between September and November we held around 300, and another 400 events are booked for the spring. It’s quite a French programme. Speakers so far have included the lawyer Francois Sureau, who is an expert in civil liberties, and the writer Erri De Luca, who sold out four conferences.

It expands mk2’s overriding philosophy that cinema is not only entertainment, but that cinema and culture can influence and contribute to changing the world. With the institute, we’re using the theatre as a sort of modern-day agora, allowing people to participate in a collective reflection and experience.

Another interesting development has been mk2’s one-year deal with Netflix for 50 classic films. You have been critical of Netflix’s streaming model. Does this represent a thawing of relations?
The Netflix deal was ‘business as usual’, even if it prompted media interest. We’ve worked a lot with Amazon and MUBI in the past, way before Netflix, and nobody paid attention, especially journalists. The interest shows the power of Netflix and its communication strategy.

I am still critical of Netflix, and I haven’t changed my opinion on many things. But when it comes to classic cinema and cinema heritage, they’ve changed their stance so why wouldn’t mk2 work with them? It’s my job to ensure these classic films are seen by as many people and as many generations as possible. For that, Netflix is a wonderful tool.

All in all, it sounds like you’ve had a more fruitful year than normal?
Not really. Most these projects were already underway or in the air but the pandemic has acted as an accelerator. We’ve used this lost year to prepare the future.

There has been a real determination on the part of French cinemas to reopen as quickly as possible each time restrictions lift, which we have not seen in the US and UK. What do you think is driving this?
There’s a real crisis in Anglo-Saxon cinema. When you look at the box office country by country, what’s missing is the share usually taken by US cinema. So in the UK, that’s normally 80%, which means there are hardly any admissions. In France, where the US share is normally 50%, we’re missing 50%. My cinemas where the programming is more mainstream and revolves around blockbusters are down 70% on` admissions. My cinemas which are more arthouse, are missing 30%. There’s a crisis around the US share but not around cinema.

How have you adapted your working style to stay productive and sane this year?
As the managing director of a company, I had to make peace with the situation. I tried to stay permanently optimistic, reminding myself it was temporary, that it would pass and life would take off again.

Did you have more time for yourself or to pursue other interests?
As you probably know, Zoom is a false friend. We’ve been working hard, at least as much as normal, if not more.

Were you worried about the future of MK2 and your employees?
In France, we had the good fortune to have immediate and massive support for companies right from the get-go. We were also lucky in that we hadn’t just opened a new cinema somewhere or have big investments in productions impacted by the pandemic, so we weren’t too exposed.

Is there one thing that changed during 2020 that you would like to see continue in 2021?
There are no changes in any direction that I see as having been positive for life or humanity. The fact that we can now get food delivered from our favourite restaurants, for example, doesn’t seem like a huge leap forward.

What’s the one thing you’re pinning your hopes on for 2021?
I would like reason and rationality to regain ground in the world and hope we are going to move away from an era of fake news and conspiracy theories. Not just because of [US president Donald] Trump’s departure, but I hope we will see the whole world turn its back on populism.

Audience habits have changed in 2020. Do you think this will have a long-term impact?
I don’t think audiences in France have changed. One of the big worries was that people would start consuming differently but when the cinemas reopened here, it showed the reverse. You could see people wanted to get out and enjoy themselves with others.

How can the entire industry support more inclusion behind and in front of the camera in 2021?
Cinema is in the process of doing this organically; maybe not fast enough, but it’s happening. There are more women directors, more diverse subjects. It’s the creators who are changing, and we are here to support the creators.

Your international sales team has handled a lot of female-directed features in recent years. Is that a deliberate move or something that happened organically?
The company worked with the likes of Agnes Varda and Claire Denis from the early days. My father’s [Marin Karmitz] first film as an assistant director was with Agnes Varda. My grandmother was Françoise Giraud, France’s first-ever minister for women’s rights. There have also been women in positions of responsibility at the company throughout its history. Next year, more than 50% of the films in our line-up are directed by women. I see a new diverse generation of filmmakers emerging but that’s not due to quotas or anything like that, it’s just part of the company’s DNA.

What excites you about the future of the industry?
Everything is changing. That can be stressful, but it’s also a moment of opportunity. We are living in a moment of cinema’s history, which is as significant as the passage from silent to talking movies, or the arrival of television. These big disruptions that have already happened several times throughout the history of cinema can also have a revolutionary knock-on effect for the creators.