SUNDANCE LONDON: Michael Fassbender reveals why he chose a role played entirely under a mask and Jon Ronson talks about how the script changed over time. 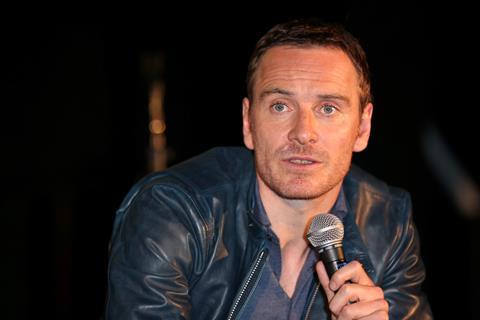 On the opening night of Sundance London, the cast and crew of comedy-drama Frank took to the stage to answer questions about the movie, which debuted at the Sundance Film Festival in January.

Jon and Peter, did you always envision having Michael Fassbender as Frank?

Jon Ronson: No. It came as a wonderful and mysterious surprise. Maybe Michael can clear up how it happened. The way I remember it, we were passing the script between us – me, Peter and Lenny – and then suddenly someone said: “Michael Fassbender wants to be in it.” So that’s my memory but my memory’s shot to fuck.

Michael Fassbender: I just got the script. I think my agent, Conor, managed to intercept it or steal it somewhere along the line when you were sending it back and forth. I got it, read it and loved it. I thought it was something that was very unique, unusual, heartfelt, humorous and unexpected all the way. I wanted to be a part of it immediately. I was a big fan of Lenny’s work so it was a very simple choice.

Peter Straughan: But, Michael, would you say it was the script first of all? [laughs]

Why did you choose SXSW and did you get to go?

JR: I had heard stories of how horrific it was at SXSW. I liked that it was everybody’s dream to go to SXSW but then you hear stories… like Belle and Sebastian told me that when they did get to go to SXSW it was like a complete fucking nightmare. So I thought it would be funny that it would be Jon’s dream but the reality was – and this is being unfair to SXSW – but maybe a little bit more commodified than Jon might have felt.

Lenny Abrahamson: It would be very easy to contrast Frank’s heartfelt, straight from the gut music with something very cheesy. So we felt if we went somewhere like SXSW, at least you’re playing with an ambition that – for an audience too – you can get behind until you go and see the reality.

But we didn’t shoot at SXSW. We shot in Albuquerque, New Mexico because it has a better tax break. That’s how it works, unfortunately. So we recreated parts of SXSW. I’d never been and, funnily enough, the second place it screened after Sundance was SXSW. So I went and registered at SXSW with very smiley, very hip people and what was really brilliant is that they all thought we had shot at SXSW.

How early in the process were the musical elements introduced?

JR: All me and Peter wrote in the script was that the music has to be beautiful and ridiculous at the same time, which was a lot easier to write than enact.

Stephen Rennicks: There’s a line in the script that says: “A beautiful melody comes from one of the songs,” which is a few words on a page and utterly terrifying for me because I have to write the music.

LA: Around a year before we started shooting, Stephen started working on ideas and we also went into studio with just musicians to experiment. The music had to be out there but you also had to think, “Yes, Jon’s right. If they just moved it a tiny bit towards the mainstream, it could be big.” You’ve sort of got to want what he wants before you recognise what it’s going to do to the band.

The music had to be written around what the actors could perform, which in Domnhall’s case is very limited – sorry. But the determination was that everybody plays live and we film it live and it doesn’t feel like a pop video where people are miming to a track. That was another constraint.

What drew you to Frank’s story? Was it always meant to be contemporary?

PS: Interestingly, we did originally set it in the ‘80s because we thought if you’re going to create a musician who’s making music far ahead of their time that no-one else gets but the audience gets, we would have to set it in the past. But when Lenny came on board, he said quite rightly: “I don’t think we need that.” I think that was the right choice.

JR: Before Lenny got involved, the script was quite baroque. There were scenes in Germany just after the war and scenes in the future and in Alaska. Fuck knows how we would have got the budget to film that. When Lenny came in he rightly said the best bit was Vetno, when they go off to a house in the middle of nowhere and it becomes a gently unfolding thing. He said we’d make the whole film unfold gently and we’re on the journey with Jon.

It used to be bookended by Jon in middle age, looking back at his life in the ‘80s and how he’d fucked everything up and was feeling remorseful. But Lenny said get rid of this. Setting it in present day meant we could make social media a character and the slightly self-conscious way you behave on social media, which was enormous fun.

Given that the film is fictional, when did you decide to make Frank visually Frank Sidebottom as opposed to creating your own iconic, large headed, papier mache artist?

LA: There’s a sense that things have to be one thing or another. People are rigid about what they accept in a film so it’s either a biopic or it’s not. But the way I see the film is that it’s a spark of something really amazing that was deep in what Chris Sievey did with Frank Sidebottom. Freewheeling, anarchic, creative, serious, tender, silly and lovely at the same time. That’s the bit of Frank that inhabits the film. So to deny that’s where it had come from, because Jon was in the Frank Sidebottom Oh Blimey Big Band and this idea came from a newspaper article he wrote so the roots of the idea are in Chris Sievey and Frank so why not just let that be there.

He himself was very excited about that idea. He didn’t want a straight film about him. He loved the idea of this. Just like Frank Sidebottom had Little Frank – a puppet version of himself – this is if Frank Sidebottom went to sleep and had a dream in which he was reincarnated as a cooler, more muscular, strange, American, outsider musician. That’s what this is.

That left us with two choices. One, you make a Frank Sidebottom film where he goes on an adventure like Pee-Wee’s Big Adventure, which could have been really good. Or you take the essence of our adventure together – me, Chris and the other band members – and completely fictionalise it. Then bring in people you really admire, especially Daniel Johnson who was a big influence on the film.

Jon, what was it like writing a screenplay collaboratively after being a journalist?

JR: I had no idea how to write a screenplay and learned everything from Peter and Lenny. They’re great people to learn from.

In real life, it was Chris/Frank who wanted to make the band more mainstream. Everyone around us was getting famous. Our driver left to try and make it in radio and within five years he was earning £30m a year. It was Chris Evans. My neighbour Mani had a band.

We were going back and for to Leeds and Sheffield in our Transit van. Chris tried to go more mainstream and it failed. When we first started writing the screenplay, Peter said it would be better if Jon was the one trying to make the band more mainstream and I’d never thought like that as a journalist for 30 years. So I realised I was in a world that Peter and Lenny understood a lot better than I did.