SUNDANCE LONDON: Actors Ryan Reynolds and Gemma Arterton were joined by director Marjane Satrapi to talk about their comedy horror, The Voices. 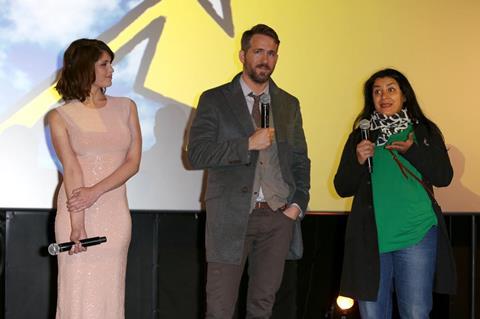 On the final night of Sundance London, leading man Ryan Reynolds and British actress Gemma Arterton ventured out to the O2 to answer questions about their film, The Voices, with director Marjane Satrapi.

Satrapi is best known for her animated drama Persepolis, which won the jury prize at Cannes in 2007 and was nominated for an Oscar, BAFTA and Golden Globe.

The Voices centres on disturbed factory worker Jerry (Reynolds) who receives advice from his pet cat and dog following the accidental killing and cover-up of a co-worker (Arterton).

The film, which debuted at the Sundance Film Festival in January and is distributed by Lionsgate, delivers scares, gore and laughs in equal measure.

Following the screening, the two actors and director took to the stage…

Ryan, why did you want to make this film?

RR: Michael Perry wrote a fantastic script. He must eat LSD-laced cereal every morning. It was on the Black List in Hollywood, which is a list of great, absolutely unproducable screenplays. Marjane found it and decided this needed to be seen.

MS: It was the kind of script you couldn’t put down. I don’t like to read scripts as it takes me forever. But I read this in one go and when I was finished I thought: “Thank God that’s over.” When I woke up in the morning, I said: “Oh God, it’s so fucked up. I have to do it!”

What was it about the script?

RR: Well, I wasn’t going to make Green Lantern 2. I’ve always been lucky in my career to make small independent films and larger films, to varying degrees of success as my previous joke fell into. I loved it. The character ended up as a Norman Bates-y guy, even if that wasn’t the intention. But the writing was incredible and unusual.

It’s a directors medium so actors – when films work – love to take credit for everything but that shouldn’t be the case because these films live and die by directors. Marjane had an incredible resume and eclectic work and obviously knew how to execute something unusual.

I chased the job. I met with her. I don’t think I was her first choice at all. I showed up 15 minutes early, all punctual, in New York and left somehow as ‘Jerry Hickfang, animal whisperer’.

MS: He kept telling me: “I’m Jerry,” and I was thinking: “Don’t tell me that!” But the moment I met Ryan, I knew he was right for the role.

It was the same with Gemma. Before her I met with two other actresses and was making jokes but they thought that – since I come from the Third World – they had to be very serious and talk about the problems of poor people. If I worked with them, I’d kill them after two days. But when I met with Gemma, right away I knew she was the one whose head I wanted in the fridge.

Ryan, how did you prepare for the role?

RR: It was on the page. But the performance is based on someone I know - everything from the physicality to the funny weird Jerry walk. I was only going to play Jerry. The cat and dog was something that came later. They looked everywhere for voices and I had a thought, sitting at home in New York. The cat and the dog are aspects of Jerry’s fractured psyche so I should voice the cat and dog.

The cat is based on a guy I know, actually my agent who’s from Glasgow. The dog is a woman I know who lives in Louisiana who’s a really cool lady but sorta “talks like this”. So I grabbed the scene where Jerry is having a conversation with the cat, dog and Fiona’s decapitated head on the coffee table and did all the voices at once. It’s a conversation about whether he is good or bad. I recorded the whole scene on my iPhone and sent it to Marjane and got hired that day.

Were there references to other horror films like Maniac or An American Werewolf in London?

MS: I’m absolutely not a fan of horror films. I’m horrified by them. But the DoP of this is the DoP of Maniac, so if it reminds you of that it is because he has a certain style.

How long was it between reading the script a getting into production?

MS: It was about 10 months… a year. It was a script that was on the Black List and they’d tried to make it and it didn’t work because it’s not an easy film to do. It’s a little immoral and subversive. So it wasn’t easy to finance this film. But to start making a film, you have to start doing it. If you wait for the money, you’ll never do it. So you work and then the money comes. Then you just have to do it.

What do you think about the film’s message that people with mental health issues are quite dangerous?

MS: This movie is meant to be fun and isn’t actually a documentary about mental illness. At the same time, it’s a film about a schizophrenic person. I have known schizophrenic people who hear voices and see people. There are many levels. The guy tries to be a good person. He doesn’t kill these women to have fun. He is mentally sick. If there’s a message, it is “Don’t judge these people.”

But if I said that was the purpose of the film, that would be a lie. This movie is supposed to be about dreams, poetry, horror, comedy.

Are you a cat person or a dog person?

MS: I don’t like dogs at all. Dogs are wolves that have been adopted by man. However, when shooting, you say to a dog: “Sit,” and the dog sits. You say that to a cat and they say: “Go fuck yourself.” They will do whatever they want.

In the film, I prefer the cat to the dog. He is much more fun. The dog sounds like a nice Republican.

RR: I’m a dog person and I have several. And I love cats, but cats hate me. I picked up that cat one time in the movie and it was like a ginger grenade went off. I scoop the cat up right before I head into an air duct.

We only did one take because the moment I disappeared round the corner, somehow the thing had grown 40 more claws. I had one in my face, one on my shoulder, forearm, hand. I tossed the cat to the trainer and the cat curled up in the trainers arms like it was in skin heaven. Cats don’t love me. But I didn’t grow up with them so they can smell my fear.

When you started in the industry, what was the best advice you received?

GA: It was from an acting teacher that said follow your instincts because they’re always right – which I then preceded not to do for most of my career but am now trying to do.

Would you rather make a film that gets a strong positive or negative reaction rather than just a neutral one?

MS: Absolutely. When you hate something very much, it means you might like it a bit. In the middle is the worst. But I don’t pick my projects to make a big impact. I’m 43, a heavy smoker and very optimistic. Let’s say I make movies for another 30 years. If I work very fast, I could make another 50 movies. That’s not so much. If before my death I can try all the different stuff, to say I’ve tried everything would be exciting to me.

Do you enjoy making films outside of the Hollywood studio system?

Isn’t it easy to finance a movie like this when A-list actors like you come on board?

RR: Movies like this aren’t generally received in a multiplex. You get to do a movie like this because there isn’t an enormous investment in the outcome – the outcome being that it makes $100m. You get to do stuff like this where a guy listens to his Scottish cat and his dim-witted Republican dog for 90 minutes because it’s unorthodox and different. The budget will be minimal, everyone will work for nothing. You just need to make the most of it.

You hope people go see it and it catches fire because it’s good for films. When a movie is polarizing, that can be amazing. When people walk out of a movie and go “meh”, that’s not a compliment.

Why was the colour of the company in the film pink?

MS: One of the reasons I was really attracted to this project is that I could create a whole world. Film is a place where I can do whatever. I always had to find something that was on the edge of reality. Is it Jerry’s point of view? But I can also justify workers wearing pink as it will make the people happy to continue working there. I also think it’s beautiful. I like pink.

How would you classify this film in terms of genre?

RR: The movie is not easy to classify. Can riding a dolphin through the apocalypse be a genre?

MS: I can’t watch horror. I have to cut the sound to handle it. At the beginning, I said that I don’t like gore or blood. But the scene where he cuts someone’s throat, I was calling for more blood. Since I’ve done it, it no longer makes me scared.