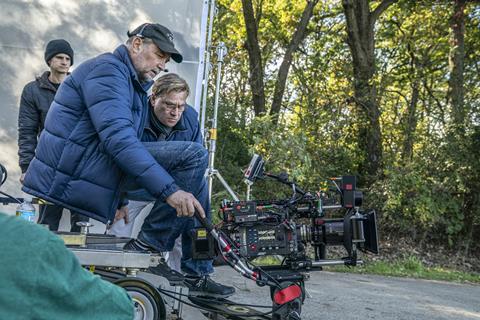 Phedon Papamichael’s work on The Trial Of The Chicago 7, Aaron Sorkin’s account of the political prosecution of Vietnam War protesters in 1969, is built on in-depth research of documentary images and footage from the time. Filming is also synchronised to Sorkin’s dialogue-rich script, says the Oscar-nominated cinematographer, a frequent collaborator with filmmakers Alexander Payne and James Mangold.

For Sorkin, Papamichael adopted wide-angle shooting in order to showcase both the crowded courtroom and the riot scenes with over 150 extras.

The cinematographer is currently prepping the new untitled Indiana Jones project, directed by Mangold, set to shoot at Pinewood Studios. He is also in post-production on his own fifth feature film as director, Light Falls, which he shot last year during lockdown and describes as “a bit of a revenge thriller about this lesbian couple traveling in Greece”.

How did Aaron Sorkin’s precision for dialogue determine your approach to the images?
Sorkin is a man of the rhythm, the poetry, the word. The beats that are important to him are often three seconds or five seconds. So it’s important not to create a big cinematic crane shot for something like the riot scenes because it won’t work with the pacing of the edit.

How did you keep the courtroom scenes fresh and visually distinct from each other?
I wanted to apply that classic, composed approach to the courtroom — which was an abandoned church in New Jersey. So I don’t move the camera much when an actor’s moving, to not draw attention [to the camera].

The widescreen-expanded anamor­phic Panavision T Series lenses with the Arri LF allows you to have close-ups without isolating the person. You still get the sense of the people next to you. And I applied three cameras in the courtroom. It was a tight schedule — we had 35 days. Twelve days in the courtroom for 90 pages.

Is it a challenge to work with such a powerhouse ensemble of performers?
It’s such a complex, diverse ensemble cast and everybody with their own agendas and ideas. Sacha Baron Cohen is a writer/director/producer, Mark Rylance is a theatre director and Oscar-winning actor, Eddie Redmayne is a classically trained British actor and Oscar winner, Jeremy Strong is more method with a television background. It was a diverse group in terms of work philosophies.

What were your visual references?
Films from the 1970s like Klute, Three Days Of The Condor and All The President’s Men — they are not really direct references to emulate but Aaron understands that period very well.

For the riot scenes, did you borrow from documentary approaches with handheld camera operators?
The riot scenes outside offered the opportunity to get a little rougher — not so controlled in terms of what the cameras were doing. In the meantime, you’ve got to cover people taking the hill, getting teargassed. So that was about immersing the two cameramen in the crowd, handheld. Luckily the tear-gas smoke helped with that.

Did it help to be on the real locations where the riots took place at the Democratic Convention in Chicago?
We shot in Grant Park in Chicago, right on Michigan Avenue — and you have the Hilton right there, and there’s the hill. We had the advantage of having those events well documented because Haskell Wexler shot that era on the ground in his film Medium Cool. That set the tone, as did the stock footage we accessed and used in the film.

How is the new Indiana Jones film going with James Mangold?
It’s interesting. The US studios are trying to test the [Covid] models in London like they did for Mission: Impossible 7 and Jurassic World: Dominion. They’re seeing what kind of safety restrictions work. Can we operate with a large crew and a large budget? On big stages? They’re testing them in Europe, whether it’s Prague, Budapest, London or Berlin.