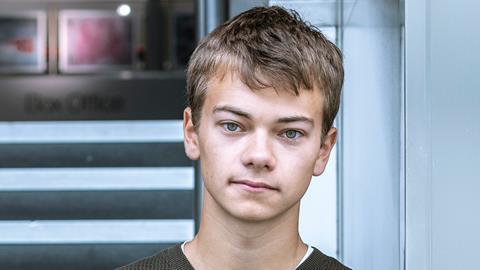 Conrad Khan is catching a second wave following his high-profile entry into the business.

After starring as a young Chris Hemsworth in fantasy blockbuster The Huntsman: Winter’s War and winning a role in Alan Ball’s HBO musical drama pilot Virtuoso, Khan has spent recent years honing and strengthening his skills as an actor.

The results are on full display in County Lines, a gritty drama in which Khan takes the lead as teenager Tyler who is groomed to transport drugs across the country, with devastating consequences.

“I spent eight months working through the script and explored each tiny thing about Tyler’s life,” says Khan of his rigorous approach to the character. “It was one of the most gripping scripts I’d had the pleasure of reading, and it oozed with honesty and excitement.”

Directed by Henry Blake, County Lines premiered at the 2019 BFI London Film Festival and is scheduled to reach UK cinemas in November.

Khan was raised in London, the son of parents from Pakistan and Germany, and spent his formative years at Arcola Youth Theatre. Last year also saw the young actor take the lead in Roland Kennedy’s short The Passenger and a supporting role in Black Mirror episode ‘Smithereens’, opposite Andrew Scott.

He is now gearing up to study film at Queen Mary University of London and hopes to return to Hungary to complete the shoot of BBC drama Baptiste, which was interrupted by the Covid-19 pandemic. He has also secured a significant role in another TV series, which has yet to be revealed.

Looking further ahead, Khan says: “The characters I do quite well are these complex, coming-of-age roles with a lot of brooding and angst, but I would also like to explore other facets of character-building such as comedy. With the exposure from County Lines, I hope there’s an opportunity to go far. I’m excited for what the next few years hold.”