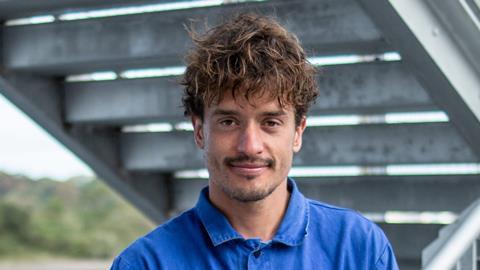 Cinematographer Ruben Woodin Dechamps categorises most of his work in two distinct styles.

“There are two worlds that I really enjoy working in,” he says. “One is a super-honest, quiet approach that is very unfussy and hiding the camera as much as possible. The other, which I work with on music videos, is trying to make DIY rigs that make the cameras move in unusual ways.” One example of the latter was Bonobo’s ‘No Reason’ video, which he shot on tiny cameras mounted on a handmade miniature train.

It was the former approach that he employed to great effect in The Reason I Jump, Jerry Rothwell’s Sundance audience award-winning documentary described as an immersive cinematic experience of non-speaking autistic people.

“I wanted to create an observational approach that was an honest and quiet visual cinematic experience, an invitation into their intimate spaces where you could feel comfortable looking without judgment,” Woodin Dechamps explains. “It felt important that although their sensory perception of reality may differ from a neurotypical person, it shouldn’t be depicted as constantly hallucinatory.”

He is working with Rothwell again on a new documentary series, and has been shooting Road Enraptured, Nathaniel Kochan’s short documentary about spirituality on motorways, and LFD‑Hope, a low-budget feature directed by Josh Loftin that has been in the works for five years.

When he is not working in London, Woodin Dechamps is in Cornwall experimenting with cameras and filming an as-yet-untitled project, backed by Cinelab. “It is more abstract interpretations,” he explains of his side project. “After years of trying to get exact predetermined images, it feels great to work on something messy.”