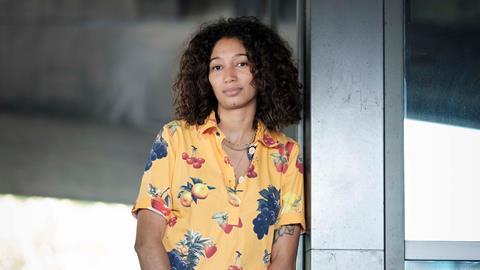 Raine Allen-Miller had an immediate reaction when producer Damian Jones sent her the screenplay for London-set comedy Vibes And Stuff with an invitation to direct. The title, she explained to him, was a negative. She was also keen her first feature would be one she had written herself.

“But I read the script, and I was just laughing so much,” she says. Allen-Miller was in, although she accepted Jones’ invitation to “make it my own” — relocating screenwriter duo Nathan Bryon and Tom Melia’s story from Camden in north London to Peckham and Brixton in the south of the city, and paying more attention to the female characters.

Shot this spring during the pandemic as Untitled Romantic Comedy, Allen-Miller’s debut feature is about meeting the right person at the worst possible time, and is backed by BBC Film, the BFI and Disney’s Searchlight Pictures. Vivian Oparah and David Jonsson lead the cast.

Born in Manchester before moving to Croydon aged 12, Allen-Miller’s route into filmmaking saw her segue from studying art and media at the Brit School to illustration at Camberwell College of Arts and then a career in advertising. Following her debut short Jerk (BFI London Film Festival, 2018), she began a dialogue with Eva Yates, commissioning executive at BBC Film, about next steps. Yates had read Vibes And Stuff and supported Allen-Miller to direct. After boarding, the filmmaker developed the screenplay with Jones, Yates, the original writers and script editor Sophie Meyer.

She is now developing her own screenplay with BBC Film, a heist comedy “about five Oxford students who are out of place”, as well as comedy-drama TV series Pam for Anony­mous Content and Somesuch. The latter company also produces Allen-Miller’s commercials.

“I am passionate about identity and how quite serious, political subject matters can translate into comedy,” she says. “I’m not afraid of commercial unapologetically entertaining film and telly that people can enjoy. I don’t want to make art films that you have to have a degree to understand.”