French director François Ozon explains how his black and white post-World War One melodrama Frantz has a contemporary resonance in the age of Brexit and rising nationalism across Europe. 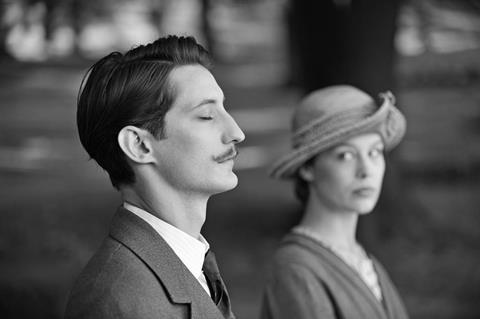 French filmmaker François Ozon returns to Venice for a third time with his black and white period drama Frantz set in Germany and France in the immediate aftermath of First World War.

The early word is strong on the film.

In the movie, Yves Saint Laurent star Pierre Niney plays troubled young French man Adrien who travels to a provincial German town immediately after the war to lay flowers on the grave of Frantz, a local soldier who died in the trenches at the age of 24-years-old.

His presence intrigues Frantz’s grieving fiancé Anna – played by German newcomer Paula Beer – but angers others in the town who are still smarting over the humiliation of defeat and mourning their dead sons.

The work is liberally inspired by German-American director Ernst Lubitsch’s 1931 film Broken Lullaby which in turn was adapted from a play by French writer Maurice Rostand.

Eric and Nicolas Altmayer of Paris-based Mandarin Cinéma produced the feature with Stefan Arndt and Uwe Schott of Berlin-based X Filme Creative Pool on board as co-producers.

Ozon talked to Screen ahead of the film’s anticipated premiere in Competition at Venice.

What was the inspiration for the film, a desire to make a period drama, a melodrama?

No, I wanted to make a film about lies and secrets. That was my point of departure. Then I came across Maurice Rostand’s play and fell for this tale of a young French man who places flowers on the grave of German soldier just after World War One.

There are lots of French films set against the backdrop of World War One but they’re always from a French point of view. I thought it would be interesting to show what was happening in Germany, the sense of humiliation amongst its people linked to their defeat and the terms of the Treaty of Versailles as well as the rise of nationalism which would lead to the Second World War.

The scenes capturing nationalist sentiment in both Germany and France are quite striking given what is happening in Europe and the rest of the world right now. Did you realise the film would have this contemporary resonance when you were making it?

﻿When I started the project, my producers were rather underwhelmed at the idea of yet another film set against the backdrop of the 1914-18 war. My response was that I felt the period resonated with many things happening today in Europe and the rest of the world: the rise once again of nationalism, the return of borders, and even now Brexit, which of course I didn’t know was going to happen when I was making the film.

There is a tension in Europe and the world. I felt I could talk about what’s happening today but in an indirect manner in a way which allows the spectator to question current events. As we know history often repeats itself and often sooner than we expect – it was interesting to put this in perspective.

What was the thinking of the black and white aesthetics of the film?

Making the film in black and white was a way of making it realistic in terms of how we see the period today. Our contemporary vision of the 1914-18 War is in black and white. Also, it was a period of mourning and suffering for many people – the black and white worked well from an aesthetic point of view. Every and again colour comes back at points where the main characters are coming back to life again.

What did you shoot in digital or 35mm?

I like to shoot in 35mm. That was important for me.  I’m not sure period films shot in digital really work. I didn’t want to use special effects or shoot against a green screen. I wanted to shoot against real backdrops.

Adrien and Anna are perhaps the most innnocent characters you have created?

They’re victims, characters who are truly suffering. They’re victims both vicitms of their era. Anna is also a victim because she is a woman of this era. Adrien is a victim of the war. I think maybe in this film the spectators will be more willing to accept their lies. In my other films, they perhaps questioned my motives of my characters – maybe even find them perverse. But here, it’s a question of survival.

Why did you cast Pierre Niney and Paula Beer in the lead roles?

The choice of Pierre was a no-brainer. He is one of the most talented actors of his generation and also one of the [most] hardworking. It was a complicated role. He had to play the violin, speak German and know how to waltz and he worked all three for the film. I’d seen him in other films. He has this fragility that I thought would work here and also his face works for a film set in this period.

Paula Beer, I didn’t know her at all. I did a classic casting in Germany and saw a lot of young German actresses who spoke a bit of French. The minute I met Paula I felt she was right for the role. She too has a fragility and beauty about her but also a force. Even though she was just 20 when we cast her, she also had a tremendous maturity.

Was it difficult directing in German?

I’ve been fascinated by Germany and German from an early age. I love the German language. It was my first language at school There is musicality and rhythm to it when it is spokensoftly which is never really captured in English language or French films. It’s often presented as an aggressive,harsh language.

I also wanted to capture German culture during the period and present a positive image of the country and its people. I think my German producers were happy about this because there’s a tendency to show Germans as the baddies in French films.