With multiple Oscar wins and awards under his belt, WSA guest of honour Alexandre Desplat has become one of the most celebrated, and prolific, modern composers. 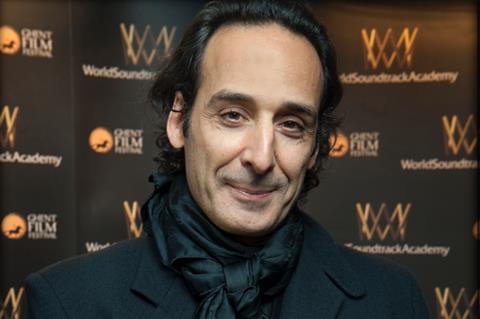 There can be few Holly­wood composers who have worked harder this century than Alexandre Desplat. He has chalked up more than 160 scoring credits since the turn of the millennium, earning 11 Oscar nominations with wins for The Grand Budapest Hotel and The Shape Of Water.

In a single year, he has been known to turn out as many as 10 scores. He is an artist who, it appears, is impossible to spread too thin.

His achievements were apparent to the World Soundtrack Awards (WSA) – which is held annually as part of Film Fest Gent – from early on: Desplat received his first of five composer of the year prizes back in 2007 for Stephen Frears’ The Queen (a production Desplat joined at the last minute, having been parachuted in to replace its original composer).

“I have been very lucky so far with the WSA,” he says, speaking from Spain, where he is working on George Clooney’s latest movie The Midnight Sky. “They’ve been very kind to me.”

This year, as well as being a guest of honour for the WSA’s 20th anniversary edition, Desplat is nominated as composer of the year once more, for his work on three films: Greta Gerwig’s Little Women, Roman Polanski’s An Officer And A Spy (J’Accuse) and Costa-Gavras’s Adults In The Room. Three films that almost encapsulate Desplat himself.

“You are right,” he says. “I hadn’t thought about it, but they capture who I am – half-French, half-Greek, with parents who gave me the values of America and the desire of becoming a Holly­wood composer.”

Desplat’s Greek mother and French father met at the University of California and were married in San Francisco, before returning to Paris where their son was born in 1961. Desplat grew up on a staple diet of US cinema, playing piano from the age of five, then trumpet, then flute.

The urge to focus his talents on cinema grew, he says, through “a subconscious number of layers that built during my early years”. He cites as core inspirations listening to Mozart as a boy, watching Herbert von Karajan conducting on TV and seeing soprano Maria Callas perform with an orchestra.

He also describes being overawed by the “incredible big scores” for Spartacus, Doctor Zhivago and Lawrence Of Arabia.

“All these layers come together and you realise that’s what excites you,” he says. “The sound of the orchestra. The movements and the silhouette of the conductor. The blasting sound of the brass. The soft and tender sound of the strings. The distant sound of the flute. As well as the fact that when you watch movies, their music is always different. It could be jazz, it could be a full orchestra. I like that versatility.”

Desplat moves from US movies to European films, from intimate dramas to blockbusters, rarely pulling from the same bag of tricks more than once.

“I think if I were giving a masterclass to a bunch of students, it would be fun to play one piece each from Little Women, J’Accuse and Adults In The Room and ask them who is the composer,” he laughs. “They’re so different. That’s what’s so fantastic about film composing.”

After grabbing the attention of US filmmakers with the waltzes of 2003’s Girl With A Pearl Earring, Desplat was treated in Hollywood like a hot new talent. However, by this point he had already worked on around 50 films in Europe.

“I suppose that’s why American directors enjoy working with me, because they can see I have one foot in Europe and one foot in America,” he says.

He elaborates: “In European cinema, the music is not meant to follow what is on screen. It’s meant to follow the psychology of the characters, or where the story­line is taking you. While in the past, American scores very much mimicked what was on screen. So by working on European movies, I have learned another way of doing that.

“Though I understand in some genres that I need to be more in synchronisation with the image, my tendency is still to take a step back and try to bring the invisible, not what is visible.”

This approach – which Desplat insists must always start with images on the screen, rather than words in the script – has made him the go-to composer for some high-profile international filmmakers, including Wes Anderson, Guillermo del Toro, Stephen Frears and Clooney.

“I am very lucky to have directors who I like come and ask me to write their scores because they think we can get along,” he says.

Much has changed in the industry since Desplat’s breakthrough in 2003. Yet he is nonplussed when asked how technological leaps or shifts in audience tastes have affected him.

“Storytelling is as old as human beings, and in 20 years I don’t think storytelling is much different,” he says. “There might be more superhero movies, but there were moments in history when there were only westerns, or only science-fiction movies. When synthesisers arrived, people thought every score had to be electronic. And then orchestras came back. Trends come and go.”

He insists he has never felt any pressure to change the way he works. “I do what I like to do, otherwise I would change jobs. I write music that I’m proud of, and I’m proud for the musicians to play.”

When asked to choose a highlight from two decades of work, Desplat is unable to pick just one.

“I could say that meeting John Williams was an incredible moment in my life,” he says. “Or winning my first Oscar. Or having Stephen Frears call me in 2007 for The Queen. Or Terrence Malick for The Tree Of Life. Or Roman Polanski for The Ghost Writer. There are all these people I’ve met who are great artists that I’m lucky to be working with. I couldn’t dream of a better place to be.”