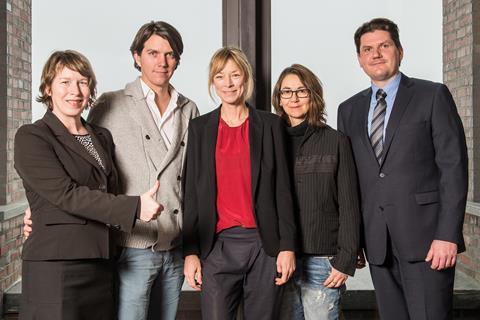 The Berlin Film Festival has unveiled the jury that will award the fourth “Made in Germany – Perspektive Fellowship” to a young director prior to the Berlinale.

Part of the Berlinale’s Perspektive Deutsches Kino section, the fellowship supports young German filmmakers in developing a project, material and screenplay. The €15,000 fellowship is funded by watch manufacturer Glashütte Original.

Eligible to participate were all directors who had a film in the Perspektive programme in 2014.

Press screenings of the Perspektive 2015 will kick off on Jan 19 with the presentation of this fellowship to a young talent from the 2014 edition.

The new jury members, all of whom will attend the award ceremony, are director Angelina Maccarone, actress Jenny Schily and producer Jochen Laube. Film journalist Knut Elstermann will host the occasion and invite the press in the name of the Berlinale to talk with the new fellowship holder.

“I am looking forward to reading the treatments for these new projects with the jury,” said Perspektive Deutsches Kino head Linda Söffker.

“Moreover, I am very pleased that with this fellowship we have created a new incentive for talented directors to continue working with great focus directly after their first success at the Berlinale.”

Writer and director Angelina Maccarone saw her drama Fremde Haut (Unveiled) win the Hessian Film Award in 2005 and was screened at the Berlinale in 2006. Her feature film Verfolgt (Hounded aka Punish Me) won the Golden Leopard at the Locarno International Film Festival in 2006 and The Look, her first documentary, was nominated for the German Film Awards in 2012.

Actress Jenny Schily starred in Volker Schlöndorff’s 2000 drama Die Stille nach dem Schuss (The Legend of Rita), which played in Competition at Berlin. In 2011 she was in the Competition for the second time, in the role of a German doctor in Ulrich Köhler’s drama Schlafkrankheit (Sleeping Sickness – Silver Bear).

Leading roles followed in Jan Speckenbach’s Die Vermissten (Reported Missing), which played in the Perspektive Deutsches Kino 2012, and in the unexpected hit Das merkwürdige Kätzchen (The Strange Little Cat), which ran in the Forum section of the Berlinale in 2013.

Jochen Laube founded production company Sommerhaus in 2006. Its first feature film was Ben von Grafenstein’s Blindflug (Blind Flight), which opened the Perspektives Deutsches Kino at the Berlinale in 2007. Since 2013, Laube has worked at UFA Fiction, whose feature film Kreuzweg (Stations of the Cross) by Dietrich Brüggemann ran in this year’s Berlinale Competition and won a Silver Bear.