Anthony Asquith’s 1928 film to get a new score from John Altman. 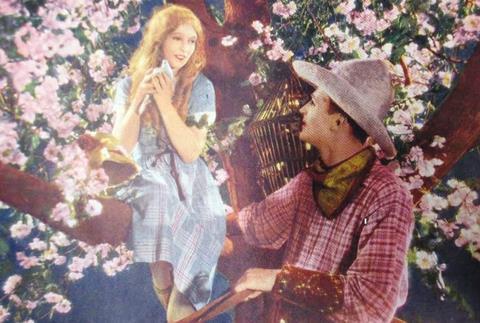 The BFI London Film Festival (Oct 7-18) has announced that its Archive Gala will be a new restoration of Anthony Asquith’s Shooting Stars.

The restoration by the BFI National Archive will receive its world premiere on Oct 16 with a new live score by John Altman, the BAFTA and Emmy award-winning composer whose work includes Titanic and Goldeneye. The score has been written for a 12 piece ensemble playing multiple instruments.

Shooting Stars, first released in 1928, was Asquith’s first film as co-director and scriptwriter and is a drama set behind the scenes at a film studio.

Chili Bouchier, Britain’s first sex symbol of the silent era, plays a key role as an actress/bathing beauty, an attractive foil to the comic antics of the comedian.

Asquith (son of former Prime Minister Herbert Asquith) had access to see Chaplin making The Circus on a trip to Hollywood and he had also been behind the scenes at German film studios. Both influences made their way into Shooting Stars.

Asquith went on to have a successful international career in the sound era with films such as Pygmalion, The Importance of Being Earnest, The Browning Version and The VIPs.

The film has been restored by a team of BFI experts from materials held in the BFI National Archive and joins previous BFI restorations of Asquith’s Underground (1928) and A Cottage on Dartmoor (1929).

Robin Baker, head curator at the BFI National Archive said the restoration took “months of work from our dedicated teams”.

Altman’s jazz-influenced new score is inspired by some of the sheet music for the song “Ain’t She Sweet”, which is seen on screen in the film.

“For the new score I have been inspired by dance band sounds and Duke Ellington in 1927,” said Altman.

“It’s not a slavish period recreation but I have tried to find an appropriate way of reflecting some of the plot twists and ironic deceptions through a series of interlinked musical themes.

“The score will be played by a very versatile group of musicians and we will end up using almost as many instruments as a complete orchestra through the whole film.”