Stars react to the death of Indian actor Om Puri 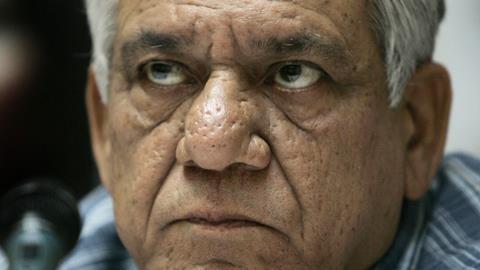 Famous faces from film, politics and sport have tweeted tributes to Indian actor Om Puri, who died of a heart attack aged 66.

Puri was familiar to audiences in India and worldwide for his roles in East Is East, My Son The Fanatic, Aakrosh, Arohan and Singh Is Kinng.

Indian Prime Minister Narenda Modi tweeted: “The Prime Minister condoles the passing away of actor #OmPuri and recalls his long career in theatre and films: PMO”.

Film star Shah Rukh Khan said: “Gods garden must b beautiful, He always takes the best” Will miss ur laughter over the shared brandy in Berlin. Will miss u lots Omji. RIP”.

Quantico and Barfi! star Priyanka Chopra said: “The end of an era …. The legacy lives on.. RIP #OmPuri”.

Cricket legend Sachin Tendulkar tweeted: “You will live in our hearts forever through the impressions you have left with your versatility. We will miss you. RIP #OmPuri”.

Nawazuddin Siddiqui, star of The Lunchbox, said: “The Best Actor in World, An inspiration 2 me & many, he was suppose 2 work with me in Manto.Deeply saddened by da news, RIP #OmPuri Saab”.

Actor and director Kamal Haasan said: “So long Omji. Prided myself on being his friend peer & admirer. Who dare say my Om Puri is no more ? He lives through his work.”

Elizabeth director Shekhar Kapur tweeted: “That unforgettable moment in film ‘Gandhi’ where #OmPuri appears for the briefest moment, you knew of the brilliance of this young new actor”.

Bollywood superstar Anil Kapoor said: “An actor, a teacher, a friend & a great soul #OmPuri ji. Filled with passion for his craft & innocence in his heart. We will miss him.”

Adil Ray OBE, star of BBC sitcom Citizen Khan, tweeted: “So sad. Om Puri brought so much realism to his characters. Gone too soon. Will drink ‘half a cup’ in his memory. Thoughts with his family.”

Actor Vivek Anand Oberoi (Krrish 3, Saathiya) said: “Saddened to hear of the passing of Om Puri ji. An immensely talented actor who I had the honour of working with. He will be missed. RIP”.