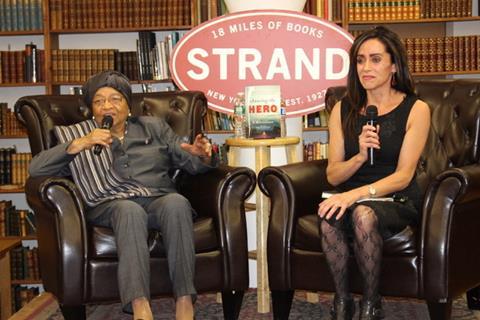 Gold Star Films co-chairman Joey Tufaro, whose producer credits include Kidnap and Maggie, will produce the project alongside Steven Brown.

Choosing The Hero: My Improbable Journey And The Rise Of Africa’s First Woman President recounts Levinson’s career across five continents and her role in helping Ellen Johnson Sirleaf get elected as president of Liberia.

Sirleaf, a Nobel Peace Prize winner, became the first elected woman to lead an African nation in November 2005. WME is packaging the project.

“My sights are set on turning the book into a major feature film,” said Tufaro. “At its heart, this is a story of heroism and perseverance in the pursuit of a life with purpose. It’s about two women warriors who were able to change the fate of a country and its people because of their courage and determination. It will be an incredible film.”

“Gold Star team has a great taste in material and I am very exited to be part of it,” said Danielak.

Levinson is pictured at right with Sirleaf at a book event.