UK, Portugal companies team to create production and financing hub on the Algarve 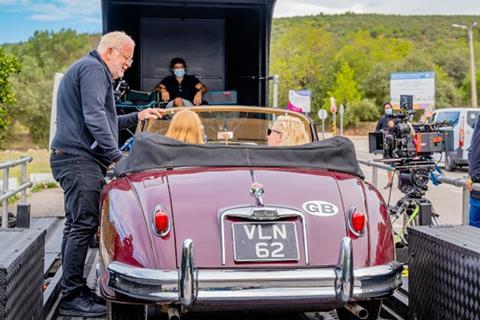 On the set of ‘There’s Always Hope’

MovieBox Premiere, the distribution arm of the MovieBox Group, Spy Manor and fellow Portuguese company Monte Productions are set to shoot drama The Infernal Machine in the Algarve this summer, written and directed by Andrew Hunt, and produced by Lionel Hicks, Julian Hicks and Alan Latham.

Filming will take place at the new MovieBox studio complex in Loulé, which is in phase one of its build and is set to open at the end of June.

Construction is then planned to start in the coming months on the 15,000m² site, which will feature three indoor sound stages, two outside water stages, a green screen, and a TV studio within a tech hub.

Spy Manor, MovieBox and Monte are also collaborating on Kit Monkman’s The Dark Room, which is scheduled to shoot in October, with producer duties shared between Julian Hicks, Latham and Thomas Mattinson, who is also writing the script. The story centres on the relationship between two women as one recounts troubling memories from her childhood. It will be shot on a hybrid of built-sets and green-screen environments.

The trio of companies are also set to shoot psychological sci-fi thriller The Evil In Me, written and directed by Carl Strathie - a character study about pain and loss and how far people might go to take revenge. Producers are Strathie, Charlette Kilby and Latham, with Julian Hicks and Spy Manor founder Everke serving as executive producers.

MovieBox and Spy Manor are also setting up a film fund with the remit to “assist selected productions and part-fund co-productions” that choose to shoot in the Algarve, Everke confirms.

Spy Manor, MovieBox and Monte also worked with Production Algarve and UK outfits Bad Penny Productions and Eagle Film Productions on Tim Lewiston’s feature drama There’s Always Hope, starring Colm Meaney and Kate Ashfield, which shot in the Algarve between October and November last year. The film tells the story of an author obsessed with trying to pen his magnum opus to the detriment of his relationship with his family.

Portugal has attracted several big Hollywood projects in recent years, including Rambo: Last Blood, The Hitman’s Wife’s Bodyguard, and Color Out Of Space.