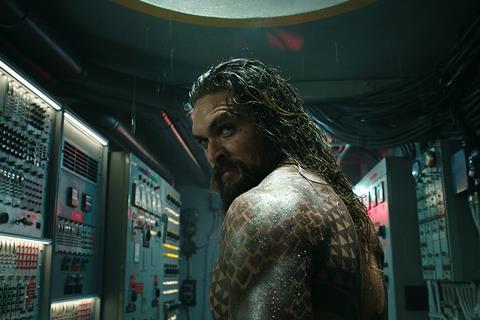 Saline superhero feature Aquaman started its UK run at the top of the box office chart, with a £3.81m opening. Adding in £1.4m in Wednesday-Thursday previews, the film is up to £5.21m, and achieved a £6,320 site average across 608 locations.

Aquaman is the only one of this group to open in December, and with no Star Wars film this Christmas, Warner Bros will be hoping it can pick up an audience throughout the holiday period. With $186.2m after 10 days in China, it is already the biggest DC film in that territory. It also scored impressive $261m after two weekends internationally, ahead of its opening in many countries including the US (December 21).

Post-apocalyptic adventure Mortal Engines took £310,763 from 404 screens over its opening weekend, and is up to £1.27m including previews after screening from December 8.

Universal have a running hit with The Grinch, which held second place in its sixth week on release, dropping just 14% for a £1.74m weekend and putting it above Disney’s Ralph Breaks The Internet. The Grinch is now up to £21.68m, and will look to continue its form across the Christmas weeks.

Boots Riley’s Sundance comedy Sorry To Bother You starring Lakeith Stanfield and Tessa Thompson put on £81,313 and is at £458,147 after two weeks.

Another title to open after a preview run, Sony’s Spider-Man: Into The Spider-Verse, took £1.23m over the weekend from 570 locations for a £2,174 site average, and has £2.28m in total. It started on UK screens on December 8, before an official opening last Wednesday (December 12).

Ralph Breaks The Internet fell 43% on its third weekend for £1.4m and £9.3m to date. Barring a surge over Christmas, it will finish down on Wreck-It Ralph’s £23.8m gross.

Bumblebee, the latest title in the Transformers series that tells a prequel story about the eponymous robot, began a preview run with £670,000 from 521 sites across Saturday and Sunday, a site average of £1,286. The film officially opens on December 26 in the UK.

Climbing documentary Free Solo, about Alex Honnold’s attempt to ascend El Capitan rock face in California without safety ropes, opened to £140,438 across the weekend, and has £391,578 including previews.

CBeebies Christmas Show: Thumbelina, a yuletide special from BBC Children’s In House Productions, had a one-day event-style release across 399 sites on Saturday (December 15), taking £201,299, with previews taking the film to £205,601.