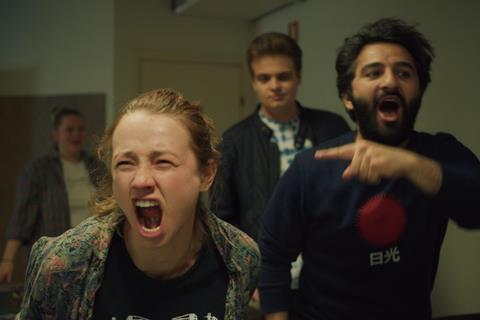 TrustNordisk has closed a hat-trick of deals on Ninjababy, Yngvild Sve Flikke’s Norwegian drama that will screen in the Berlinale’s Generation strand this week.

The film was previously picked up for Norway (Arthaus), Sweden (TriArt) and Denmark (Øst for Paradis).

Ninjababy follows a young, single woman named Rakel, played by Kristine Thorp, who unexpectedly discovers she is pregnant. Far from excited by the prospect of motherhood, she begins communicating with the fetus inside her, shown on screen using animation, which she nicknames Ninjababy.

Based on Inga H. Sætre’s graphic novel Fallteknikk, the screenplay was written by Johan Fasting.

The film premieres in EFM’s Generation 14plus on Wednesday and also has market screenings today and tomorrow. Ninjababy will next screen in the Global section at SXSW, which is set to run March 16-20.

Yngve Sæther produces for Motlys, with support from the Norwegian Film Institute and Nordisk Film and TV Fond.

Ninjababy received its world premiere as the opening film of Norway’s Tromso International Film Festival in January, where it won the audience award at the hybrid version of the festival