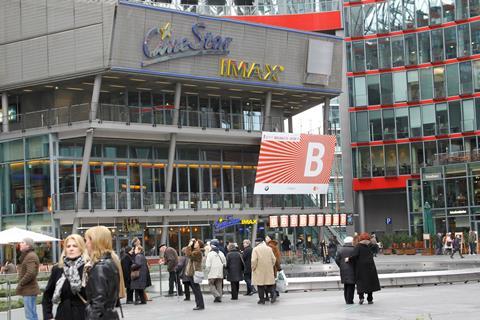 The Berlin Film Festival is on the hunt for alternative screening venues for its 70th edition in February 2020 following news the CineStar cinema complex in the Sony Centre in Potsdamer Platz may be on the verge of shutting down.

Jörg Reichel, an official at German trade union ver.di representing the complex’s some 120 staff, told local Berlin TV station RBB earlier this week the venue was under threat of closure.

If it happens, the Berlinale will have eight fewer screens available in and around its Potsdamer Platz hub for festival and market screenings.

In a statement to Screendaily, a Berlinale spokesperson confirmed Reichel’s announcement, saying: “CineStar has informed us of the closing of the cinema at the Sony Centre at the end of this year and we are currently looking into all possible solutions.”

The complex is an important venue for the Berlinale alongside its other venues around Potsdamer Platz, comprising Cinemaxx, Arsenal, dffb Kino and the Gropius Bau Cinema.

CineStar’s eight screens are used by both the Panorama and Forum sections to screen their films. They included Rob Garver’s documentary What She Said: The Art Of Pauline Kael and Prune Nourry’s Serendipity in Panorama DOK, and Camila Freitas’ Landless (Chão) and Sofia Bohdanowicz and Deragh Campbell’s MS Slavic 2 as part of the Forum programme.

The CineStar is also a key screening venue for the European Film Market (EFM). The market has previously described the complex as “the second most important Berlinale cinema” after the nearby Cinemaxx multiplex, praising it for its festival atmosphere and fully-equipped bar.

Seating capacity at CineStar complex ranges from 140 seats in CineStar 6 through to 515 in CineStar 8, with 2,224 seats in total.

Finding alternative screening venues to replace the CineStar– in close proximity to Potsdamer Platz – will be a tall order for the new Berlinale management team of artistic director Carlo Chatrian and managing director Mariette Rissenbeek.

This fresh challenge comes in addition to having to deal with a shift of dates to the last week of February (February 20 - March 1)  for next year’s Berlinale because of the Oscar ceremony coming forward two weeks to February 9. (The Berlinale has said it will wait until after the 2020 festival to take a decision on when to stage the 2021 and 2022 festivals following the news the Academy Awards is returning to its late February slot in those two years.)

Potential replacement venues for the  CineStar such as the Hackesche Höfe cinemas and Cubix at Alexanderplatz are a 10-minute taxi or U-bahn ride away from Potsdamer Platz while the Zoo Palast is now home to the TV-focused the Drama Series Days as well as screening films from the festival programme.

The CineStar complex opened in 2000 at the same time as the Sony Centre. Aside from being a popular Berlinale venue, it is also one of the few cinema theatres in the city showing original language screenings.

The reasons for its threatened closure are unclear. Union representative Reichel speculated it could be linked to the fact that its lease is coming to an end and that the   owners of the Sony Centre want to repurpose the site. He also suggested the theatre’s management were threatening its closure in a bid to negotiate better terms.