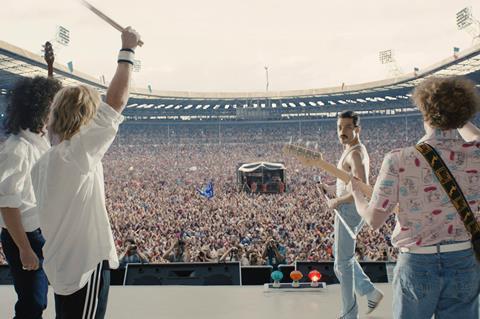 Bohemian Rhapsody dropped by just 11% to stay top of the UK box office in its second week on release. It took £5.7m over the weekend from 682 locations (a strong £8,441 average), and is already up to £20.4m in the territory.

Although it is behind the £27m second week total of another 2018 musical hit, Mamma Mia! Here We Go Again, its drop is smaller (11% v. 27%). As with the ABBA hits, Fox is hoping the familiarity of the Queen songs will carry it deep into the Christmas period.

Fantasy adaptation The Nutcracker And The Four Realms opened to £1.75m from 578 sites over three days, for a £3,028 site average. This is below the £2.3m three-day from 539 sites (£4,267 average) scored by fellow fantasy title The House With A Clock In Its Walls in September, although the latter had a long run of previews building up to its release.

As a seasonal favourite, The Nutcracker will look to build on the growing Christmas audience in the next few weeks.

Slaughterhouse Rulez, the boarding school horror comedy starring Michael Sheen, Simon Pegg and Nick Frost, grossed £252,000 from 380 sites on its opening weekend, for a low £663 average. It opened on Halloween (Wednesday), and has a total of £395,000 since that day.

Goosebumps 2: Haunted Halloween took £860,000 from Friday-to-Sunday, a 39% drop on what was its third weekend. Buoyed by the midweek Halloween date, it has a £7.1m cume, coming up behind the first title’s £9m total.

Johnny English Strikes Again topped Universal’s holdovers with £1m on its fifth weekend and a £16.4m cume. It will look to hold off the early Christmas titles to sustain hopes of passing the first two films in the franchise, 2003’s Johnny English (£19.7m) and 2011’s Johnny English Reborn (£20.7m).

The Halloween reboot starring Jamie Curtis brought in £788,634 on its third weekend for an £8.2m cume.

A Star Is Born continued its impressive run, dropping just 16.5% on its fifth weekend to take £1.8m and a £22.9m cume. After five weeks on the chart, it has never dropped more than 26% over a single week.

Japanese animation Mirai, which premiered in Directors’ Fortnight in Cannes this year, took £68,462 including £2,236 from previews. The total came from 109 locations, largely through a subtitled screening on Friday evening. An English dubbed screening followed on Sunday afternoon.

The Wife, starring awards hopeful Glenn Close, continues its impressive tail, adding £28,214 at 59 locations across the weekend for a running total of £1.6m.

Black 47  garnered £4,971 from 15 sites this weekend, in a combined release between Altitude and Wildcard. The film now has £1.7m total in the territory.