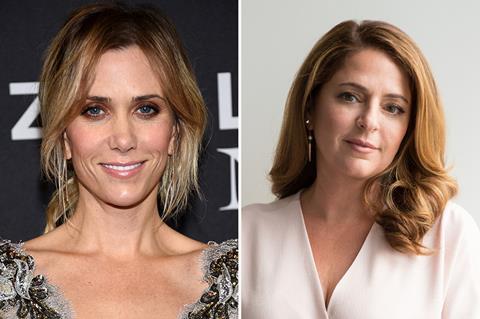 Oscar-nominated Bridesmaids writers Kristen Wiig and Annie Mumolo are reuniting to co-write and co-star in Barb and Star Go To Vista Del Mar for Lionsgate.

The comedy will be directed by Josh Greenbaum and is set to be released next year. Gloria Sanchez Productions, the female-focused production company founded by Jessica Elbaum, Will Ferrell and Adam McKay, will produce along with Wiig and Mumolo.

Wiig and Mumolo will play the title characters, best friends who leave their small midwestern town for the first time to go on vacation in Florida, where they become entangled in a villain’s evil plot to kill everyone in town.

Wiig - who also starred in Bridesmaids - most recently appeared on screen in Downsizing and her other upcoming projects include Wonder Woman 1984 and Where’d You Go, Bernadette.

Elbaum commented: “Having the opportunity to work with and support such talented female artists like Kristen and Annie, is the reason we created Gloria Sanchez. We are thrilled to be partnering with them on this project, and help them bring Barb and Star to the big screen.”

Lionsgate Motion Picture Group president Nathan Kahane added: “It is such an honour that Kristen and Annie have entrusted us with their follow up to Bridesmaids. Their projects offer a rare combination of big laughs, big heart, and female empowerment that everyone will love - men and women, young and old. Barb and Star are true cultural icons in the making, and as they embark on this hilarious adventure, we are more than thrilled to partner with Kristen, Annie and Gloria Sanchez on what we know is going to be a great ride.”