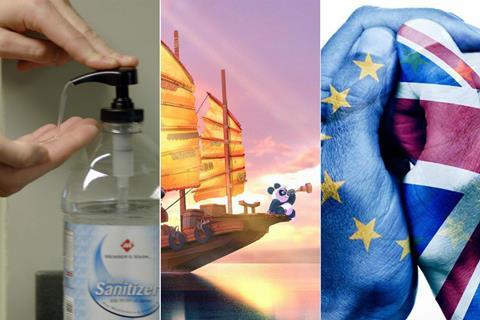 Carrying on despite coronavirus

The event contacted all attendees on Monday, March 2, the day before it opened, to confirm it would be going ahead. It has seen 80 no-shows from an expected 900 participants, including key delegates from CAA and Poland’s New Europe Film Sales. Exact reasons for non-attendance aren’t clear for all, but multiple delegates confirmed to Screen concerns over international travel led to their withdrawal.

However, the 80 dropouts is only slightly higher than the yearly average of 50. For those in attendance, the event has continued as usual, with busy pitching sessions and thriving opening and closing social mixers. Hand sanitiser has been provided at various stations in the main Palais venue, while in its Monday communication the festival recommended that attendees ‘avoid shaking hands, hugs and kisses’.

Consequently, ‘alternative handshakes’ including touching feet, elbows and offering a ‘namaste’ greeting have been a regular sight; many French delegates have chosen to ignore the recommendation and have continued with the traditional ‘bise’ greeting.

The virus concerns did affect the mood, with one senior executive (who wished to remain anonymous) telling Screen “the last thing you’re worried about is trying to log a few films.” Spirits were kept up elsewhere however: “You know you’re in the last event in Europe that hasn’t been cancelled?” joked producer David Matamoros, host to several of the pitching sessions.

There are three UK projects pitching at the event, all of which are European co-productions. This is a small number compared to 28 from France, nine from Spain and eight each from Germany and Denmark.

Among the UK projects is family animation Molesworth from Lupus Films, a co-production with Luxembourg, with Matt Lucas attached to voice the titular schoolboy at a 1950s boarding school. That title received development funding from Creative Europe, which went towards the trailer used in its pitch.

Producers Camilla Deakin and Ruth Fielding of Lupus Films said such support would not be available going forwards once the UK leaves Creative Europe on December 31, 2020. However, they also emphasised that while the funding picture will change, it won’t stop them being able to collaborate with European partners.

Kate O’Connor, executive chair at the Animation UK Council, called on the UK government to indicate where replacement support will come from. “€6m has gone to UK animation producers since the [Creative Europe MEDIA] programme launched in 2014,” she said.  “We are urging the UK government to set out plans for replacement funding, to support the level and scale of investment.”

“It is vital that replacement funding is designed to be flexible, with a dedicated strand for animated content and IP development, building on our creative excellence and potential for growth in our share of the global markets.”

With two simultaneous pitching sessions in separate rooms and a large lobby for informal meetings, Cartoon Movie has a more informal structure than larger market events such as the EFM and Marché du Film.

“It is an effective and time-efficient way of presenting and discovering projects,” said Amanda Kerridge, head of marketing at the UK’s GFM Films. ”We have also discovered new European creative companies that we would not otherwise have made contact with. In today’s changing marketplace it is important for us to stay ahead of the game by exploring what are typically new ways of conducting business.”

Kerridge and GFM Films’ head of production – animation Sean Feeney said the event had been “invaluable” for progressing discussions with both potential and existing partners on three projects and recommended that UK animators should consider attending in future.

With 66 projects this year, Cartoon Movie attracts a wide variety of animation styles, with stop-motion, digital, hand-drawn among others. Last year Disney’s The Lion King attracted some criticism for its photorealistic computer-animated remake of a traditionally animated original film.

In his welcome address to the event, Dominique Boutonnat, president of France’s Centre National du Cinema et de l’Image Animée, said “the concentration of digital players and services at the global level tends to standardise works and, consequently, to impoverish everyone’s imagination.”

This was echoed by Karsten Kiilerich and Richard Claus, co-directors of Netherlands-Denmark title Panda Bear In Africa, with Kiilerich saying “the whole idea” of creating realistic animated animals “is stupid”, and Claus saying he “didn’t see the point” in such techniques. The pair used a more traditional “cartoonish” style in their family feature, which is written by Gnomeo & Juliet and Sherlock Gnomes creator Rob Sprackling and sold by Edward Noeltner’s Cinema Management Group.

Jörg Tittel, producer of hybrid animation A Winter’s Journey, offered a differing opinion, saying, “I personally don’t distinguish between the two anymore. It’s a movie or it’s not a movie - any film coming out of Hollywood these days is half animation.”

One project used the two as separate elements. French title The Anooki, Our Amazing Odyssey, currently at concept stage, will overlay the popular plain white animated Anooki characters over non-fiction live-action footage to tell a contemporary story based around the climate change crisis.

Attendance levels – and hopefully attendees – stayed healthy, but a number of key players were missing from the event, especially among the streaming platforms. There were no representatives from Amazon, Facebook, HBO, Disney or Apple, with Cartoon Movie director Annick Maes stating the latter was invited but decided not to attend due to having only launched its online service late last year.

This made US executive Aram Yacoubian, director of kids and family international originals at Netflix, even more in demand across his brief visit. He may be one of the last execs from the company to attend an international event for a while; Netflix has withdrawn from this month’s SXSW, where it had planned to screen five films, due to the coronavirus pandemic.