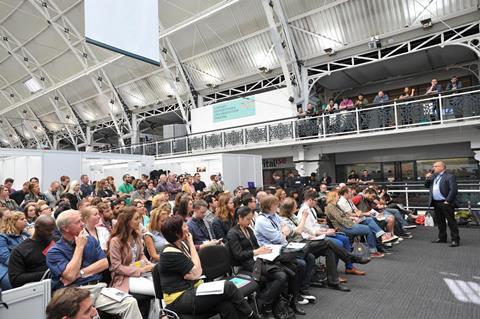 Bringing down the high cost of computer generated effects continues to prove a major challenge, according to Tony Orsten, CEO of The Imaginarium.

Speaking at the Media Production Show in London, Orsten impressed delegates with behind the scenes footage from video game Ryse: Son Of Rome, Coldplay’s music video for Adventure of a Lifetime and television series Fungus The Bogeyman.

But the boss of the performance capture studio, founded by Andy Serkis and producer Jonathan Cavendish in 2011, said keeping budgets down remained a challenge.

Talking about Fungus The Bogeyman, which aired over Christmas 2015 on Sky 1 and was produced with Dneg TV, Orsten said: “With Fungus, we were able to produce top level CG for television on TV budgets.

“TV is now producing more content at levels comparable to film. But we need to take CG costs down and make them available for TV. It shouldn’t be a barrier. No one has that sorted yet but we are in the process of working it out.”

Orsten added: “You see the extraordinary excitement when people see what can be done but then we have to translate that into something that can work on a budget. People always want more and it’s up to us to find ways to give them as much as possible.”

The exec also discussed Jungle Book, which Serkis is directing for Warner Bros but which was pushed back a year to October 2018 – putting more time between it and Disney’s live-action retelling of The Jungle Book, which has made close to $900m since its release in April.

“We are making this major feature film in which part of our job was to capture a troupe of expensive A-list artists in the shortest possible time,” said Orsten of the cast that includes Benedict Cumberbatch, Christian Bale and Cate Blanchett.

“They were completely liberated because they did six, seven, eight pages of script per take, as they didn’t need to do resets.

“What we have ended up with are really rich performances, far more rich than you would normally get. Once we have those performances, the post can be as long as you want.”

Serkis, who also plays iconic character Baloo in the upcoming feature, has previously said of the delay: “Every minute more that we have to evolve the technological pipeline will make all the difference…the evidence is there already and it’s off the chain exciting, so hang on in there… This is truly next generation storytelling, and it will be the real deal.”

Orsten also teased footage of The Tempest, in which performance capture technology will be used to render an animated character live on stage.

The Imaginarium has teamed with the Royal Shakespeare Company and Intel on the project, which will launch as part of the RSC’s winter season in November.

“The world we have inhabited for more than 25 years of performance capture is changing,” added Orsten. “We want to do it live on stage so that people can enjoy having digital apparitions, based on human performance, appear live in front of you.”

Looking to the future, Orsten added: “Billions is being spent on the hardware but not the content to go in it. Why is someone going to buy something if they can’t see something amazing on it?

“The more we all as producers can create content for these environments, the better we will be. The UK is at the centre of this endeavour and there’s no reason we can’t continue to be the world leaders.

“But we want people to think about creativity and not just the technology.”