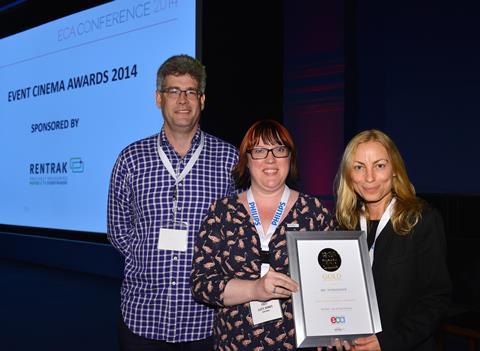 BBC Worldwide’s 50th anniversary episode of Doctor Who: The Day Of The Doctor has won the Gold Award at the 2nd ECA Awards in London.

As well as being broadcast simultaneously in 94 countries last November, the special was screened in 3D at cinemas in the UK, US, Canada, Mexico, Australia and New Zealand, generating $10.2m at the global box office.

The award was accepted by Julia Nocciolino, commercial manager for Doctor Who at BBC Worldwide.

Melissa Cogavin, managing director of the ECA, said  “We saw a big increase in the number of box office awards given this year which just goes to show how far we’ve come as an industry.

“I am delighted to see so many great titles, companies and individuals duly recognized for the hard work it takes to make a success of an event cinema release – it’s indicative of the rise of event cinema as a sector and the ECA congratulates them on a great achievement.”