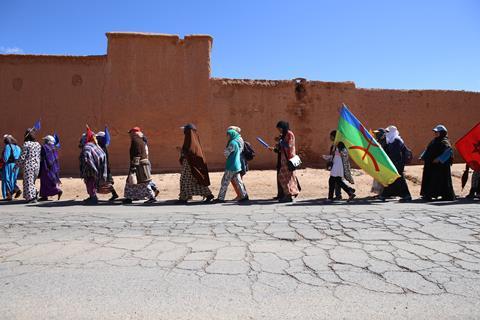 The Doha Film Institute (DFI) has announced the latest round of 38 projects to be supported under its autumn 2018 grants cycle.

Among the grantees is Lebanese filmmaker Mounia Akl who won DFI funding for her upcoming film Costa Brava Lebanon about a family whose idyllic mountain retreat home is blighted when the government decides to build a landfill by their home. It was one of seven projects hailing from Lebanon.

Other grantees included Palestinian director Laila Abbas’s comedy-drama Barzakh about two sisters who hide their father’s death in order to enjoy their sizeable inheritance rather than handing it over to their brother as sexist local laws dictate.

Other projects from Palestine include Scandar Copti’s Happy Holidays about a Palestinian student whose involvement in a minor incident in Jerusalem sets off a series of events that will reveal her double life as well as those of her family.

There was a strong showing for Palestine in the funding cycle with six projects from the territory selected for funding.

From other territories, Jordan’s Bassel Ghandour has also picked up a grant for his directorial debut The Alleys, a social mosaic picture set against the backdrop of a gossipy, claustrophobic neighbourhood in the Jordanian capital of Amman.

The selection also included projects from Mexico, Lesotho and Russia for the first time as well as from awarded Afghanistan, Algeria, Bolivia, Iran, Jordan, Kuwait, Morocco, Serbia, Sudan and Tunisia

These include Mohamed Berro’s drama TCA168: The Tarmac Year, about two cousins who hijack a plane and fly it to Strovia, a fictitious Arab-Soviet satellite island state in the Mediterranean, where negotiations get entangled in Cold War politics.

“This year’s expansion of the programme to include TV and web series acknowledges the importance of embracing new platforms and models,” said Alremaihi.

The institute noted that this round included three projects by Qatari filmmakers, including Hamida Issa’s experimental work To The Ends Of The Earth is about a Qatari woman, who travels on an environmental expedition to Antarctica. There was also near gender parity in the selection with 18 female filmmakers.

The grantees (synopses provided by the DFI):

· Beirut 1931 (Palestine, Qatar) by Kamal Aljafari about “K”, who arrives in his native Jaffa after the sudden passing of his uncle, and attempts to unravel the cause of his mysterious death.

· In Vitro (Palestine, Switzerland, France, Denmark, Qatar), the first feature by Larissa Sansour, which is set after an eco-apocalypse, and the dying founder of a vast underground orchard passes on instructions to her younger successor who was born underground. Larissa was earlier granted by DFI for her short film, In the Future, They Ate from the Finest Porcelain (2015).

· Mama, Where Are You? (Kuwait, France, Qatar) by Meqdad Al-Kout, about Abbas, a 37-year-old single man who still lives with his parents in Kuwait but yearns to break free from his mother’s care.

· Where Did I Leave My Face? (Palestine, France, Germany, Qatar) by Ramzi Maqdisi in which a man from Jerusalem decides to leave everything behind and start his life again in Paris, but his past soon catches up with him.

· Femmetasia (Morocco, Belgium, Qatar) by Mouhssine El Badaoui about Hanane, a young woman from a modest village in Marrakech, who decides to enter the traditionally male-only festival of battle bravery, Fantasia.

· You Don’t Die Two Times (Algeria, Qatar) by Ager Oueslati about Prisca, Gift, and Jenny, who have fled their home countries in Africa in the hope of a better life in Europe, as they attempt to reach their “El Dorado” at any price.

· TCA186: The Tarmac Year (Lebanon, Qatar) by Mohamed Berro. Set in an alternate timeline of the 1980s, two Lebanese cousins hijack a plane and land it in Strovia, a fictional Arab-Soviet satellite island state in the Mediterranean, where negotiations get tangled with Cold War politics and lead to the longest hijacking in history.

· The Vibes (Tunisia, Switzerland, Qatar) by Erige Sehiri, about five teenagers, who report the news of their town through the only radio broadcaster available in the area. Erige’s documentary Railway Men (2018) was previously backed by DFI.

· Barzakh (working title – Palestine/Germany/Qatar) by Laila Abbas, which narrates the story of Mariam and Kawthar, whose father’s death leads to their discovery of a large inheritance, but the sisters must keep his death a secret to secure it.

· Costa Brava Lebanon (Lebanon, France, Sweden, Norway, Qatar) by Mounia Akl, which is set in the near future, where the Badri family lives an idyllic, isolated life in the Lebanese mountains, until one day the government decides to build a landfill right beside their house.

· Happy Holidays (Palestine, Germany, France, Qatar) by Scandar Copti about a young Palestinian student, whose involvement in a minor accident in Jerusalem sets off a chain reaction of events that leads to the exposition of her double life, as well as the double lives of some of her relatives.

· Mediterranean Fever (Palestine, France, Qatar) by Maha Haj about an aspiring but depressed Palestinian writer from Haifa, who befriends his new neighbour in an attempt to convince the man to help him commit and disguise his suicide.

· Severed Head (Tunisia, France, Qatar) by Lotfi Achour is based on true events. Two teenage shepherds are captured on a Tunisian mountainside by Jihadists. Decapitating the eldest, the 14-year-old sheepherder must return his cousin’s head to the victim’s mother.

· The Alleys (Jordan, France, Qatar) by Bassel Ghandour is set in a claustrophobic East-Amman neighbourhood where gossip and violence police people’s behaviour. The lives of residents intertwine and collide as some try to maintain social norms, while others try to break them. Bassel co-wrote Theeb (2014), directed by Naji Abu Nowar, a film backed by DFI.

· It’s Far Away Where I Must Go (Morocco, Belgium, Qatar) by Karima Saidi about Aicha, one of the pioneers of the Moroccan migration to Belgium, who is buried in Brussels. The movie walks in the footsteps she left along the way from Tangiers to Brussels.

· The Dam (Lebanon, France, Qatar) by Ali Cherri is about Abu Salma, a seasonal worker in Northern Sudan, who spends his days labouring in a brickyard and his nights secretly erecting a structure out of mud in secret. His creation yet mysteriously disappears and he starts to get the uneasy feeling that someone or something is watching him.

· The Earth Doesn’t Move (Tunisia, France, Italy, Qatar) by Yosr Gasmi is set in a reception centre for political refugees, where people wait to cross the France-Italy border.

· We Are Inside (Lebanon, Qatar) by Farah Kassem in which returning to her father’s house in the radicalised city of Tripoli, Farah realises that the only way to connect with him is by joining his male-dominated poetry club.

· Zyara (Lebanon, Qatar) by Muriel Aboulrouss offers insight into the personal testimonies of individuals who have experienced and overcome a wide range of social challenges through courage, perseverance and resilience.

· The Closet Sessions (Jordan, Qatar) by Ahmad Satti Ibrahim, which is a music web series set in a walk-in closet, serves as a platform for alternative artists to showcase their talent.

· Al-Sit (Sudan, Qatar) by Suzannah Mirghani is about Al-Sit, an old matriarch who, according to tradition, must be consulted for her blessing before any family wedding, but finds out that the ancestors of her granddaughter’s suitor stir a troubled past.

· Border (Qatar) by Khalifa Al-Thani depicts the story of a Middle Eastern traveller, who unexpectedly finds himself in conflict with airport security; his only hope is for a fellow passenger to prove his innocence.

· The Bath (Tunisia, France, Qatar) by Anissa Daoud is about Imed, who is left alone with his five-year-old son for the first time, and must face his deepest fear.

· The Bystander (Lebanon, Qatar) by Rachel Aoun is about Roger, a beloved basketball coach, who witnesses a horrifically violent incident on his way to work; his whole day and sense of self is shattered.

· This Haunting Memory That Is Not My Own (Lebanon, Germany, Qatar) by Panos Aprahamian is a set of journeys through time and territory exploring the various ways in which humans acquire land and resources, and the collateral damage these methods produce.

· Sanctorum (Mexico, Qatar) by Joshua Gil, in which a child goes on a spiritual and magical quest for his disappeared mother in a small town racked between the army and drug traffickers.

· Sirena (Bolivia, Qatar) by Carlos Piñeiro about four people, who arrive on an island in search of their friend who disappeared near Lake Titicaca, but the Aymara community that found his corpse refuses to return his body for sacred beliefs.

· Froth (Russia, Qatar) by Ilia Povolotskiy, which tells the story of three people living on the coast of the Barents Sea who are united by an incredible blend of humility, inherent rebelliousness, a very specific moral code, and their attitude towards life.

· Loving Wallada (Tunisia, Qatar) by the established filmmaker Nacer Khemir, which narrates the story of Al-Andalus in the 10th and 11th centuries, as seen through the figure of the Umayyad princess, Wallada—the first European woman to hold a literary salon. The only established director granted in this cycle, Nacer’s Whispering Sands (2017) was previously backed by DFI.

· Movement (Morocco, Lebanon, Qatar) by Nadir Bouhmouch, is set in a rapacious silver mine in Morocco that has syphoned aquifer water for decades, drying out the almond groves belonging to a small Amazigh community, who have occupied the water pipeline for seven years in an effort to save their fragile oasis.

· The Forbidden Strings (Afghanistan, Iran, Qatar) by Hasan Noori is about four Afghan musicians, born and raised in Iran, who risk a dangerous journey from Iran to Afghanistan to make a dream come true—their first rock concert in their war-torn motherland.

· The Marriage Project (Iran, France, Qatar) by Atieh Attarzadeh and Hesam Eslami in which a donor’s agreement to finance homes for future married couples among mentally ill patients in a southern Tehran caring centre, stirs controversy as it goes against traditional policy.

· The Waiting Bench (Sudan, France, Germany, Chad, Qatar) by Suhaib Gasmelbari in which four Sudanese filmmakers united by an old friendship try to inspire the love of cinema in a deeply wounded country.

· Mother, I Am Suffocating. This Is My Last Film About You. (Lesotho, Germany, Qatar) by Lemohang Jeremiah Mosese, which is a symbolic social-political voyage of a society, spiralling between religion, identity and collective consciousness; a farewell letter and furious lamentation to a mother, a land, a hero, a victim, and a martyr.

· Speak So I Can See You (Serbia, Croatia, Qatar) by Marija Stojnic, set at the intersection of an observational documentary and an audio-visual experiment, connects the strangers from opposite ends of the radio signal and reimagines the role of old-school, live, spoken-word radio in contemporary life.

· To The Ends Of The Earth (Qatar) by Hamida Issa is about a Qatari woman, who travels on an environmental expedition to Antarctica in search for hope, before returning to the Arabian Gulf to find unity and inspiration for positive change. The project was supported by DFI at an earlier stage too.

· What We Left Unfinished (Afghanistan, USA, Qatar) by Mariam Ghani, which tells the mostly true story of five unfinished feature films from the Communist era in Afghanistan, and the people who went to crazy lengths to keep making films despite the threats.

· Me, Myself, and A.I. (Qatar) by Maha Al Jefairi in which, after her computer updates automatically, Mashael struggles to finish her delicious burger due to her new A.I. assistant’s well-meaning, but never-ending harassment.