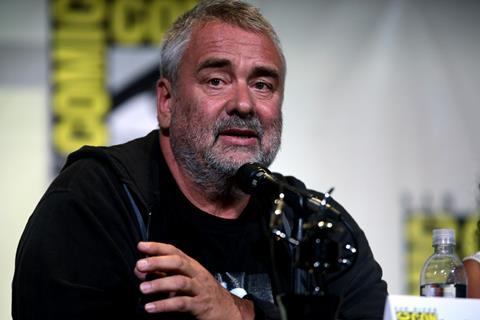 Luc Besson’s EuropaCorp has confirmed French media reports on Sunday (14) that it is in talks with New York-based asset management company Vine Alternative Investments, for the latter to take a stake in the debt-ridden company.

EuropaCorp did not comment on whether talks with Pathé, first reported in late May, had stalled.

The Paris-based company put out a statement on Sunday evening in response to a report earlier in the day in French newspaper Le Journal du Dimanche that it had dropped rescue plan talks with French major Pathé and struck a deal instead with its US lender Vine.

The exclusive report said the deal came together in the offices of Hélène Bourbouloux, one of France’s top judicial administrators, on July 3.

“Following the article published today in Le Journal du Dimanche, the company confirms, as it did on May 29, to be in discussions with several financial partners, including the group Vine, as part of the restructuring of its debt and the strengthening of its financial capacity,” the statement said.

“As mentioned in this article, Vine has expressed interest in a potential stake in the capital of the company. Discussions are currently ongoing concerning the terms and conditions of this potential operation and the financing of the group for the future.”

The company said that any agreement would be subject to the approval of a commercial court in Bobigny on the outskirts of Paris, under the protection of which EuropaCorp was placed on May 13 for a six-month period to give it breathing space to restructure its debts. There were no details on the terms of the deal or whether Vine would take a controlling stake in EuropaCorp.

“The potential realisation of this operation implies in particular the search of an agreement with the senior leaders and the presentation a safeguard plan to the commercial court of Bobigny. Therefore, the group cannot assure that this operation will come to a successful conclusion, nor give any precision on the schedule or structuring of the potential transaction resulting from the current discussions,” the statement read.

Vine Alternative Investments is a specialised asset manager founded in 2006 with a focus on the media and entertainment sector. Its founding members include managing partner and CEO James Moore, chief investment officer William Lambert, and chief financial officer Stephen Kovach.

Vine has made investments of some $700m since its creation, including taking a controlling stake in Village Roadshow, and co-financing films with Lakeshore. EuropaCorp already has ties with Vine, which provided the capital for a $100m second-lien credit agreement.

Luc Besson has been looking for fresh partners for EuropaCorp for more than a year to help the company restructure its spiralling debts.

EuropaCorp’s financial woes are related to a series of events, kicking off with the folding of its short-lived US distribution label Red after its partner in the initiative, Relativity Media, filed for bankruptcy soon after it launched in 2015.

This was followed by poor box office numbers for a series of English-language, star-driven thrillers and comedies – including 9 Lives, Shut In, Miss Sloane, and The Circle – which had also been at the heart of French company’s strategy to conquer the US.

Losses related to these productions were further compounded by the disappointing international box office figures for Besson’s ambitious $200m sci-fi extravaganza, Valerian And The City Of A Thousand Planets.

None of the company’s subsequent English-language features – including submarine drama Kursk and the recently released thriller Anna – have performed well enough to help the company bounce back. The one bright spot has been Guillaume Canet’s Little White Lies 2 (Nous Finirons Ensemble), which has grossed a respectable $22m in France.