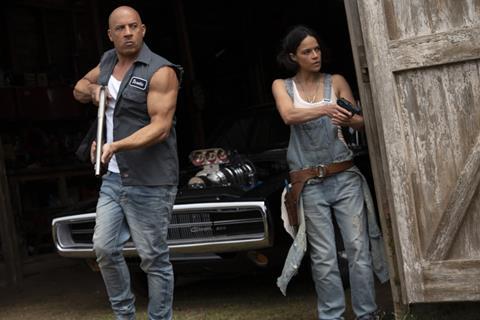 Five new territory openings including Spain and Singapore took the country count to 51 for Universal’s Fast & Furious 9, with the franchise film delivering an estimated $23.8m in international markets for the July 2-4 weekend, and $24.0m in North America.

F9 topped the chart in all its new markets, delivering $3.0m in Spain, the biggest opening of the pandemic excluding previews – despite competing for audiences on Friday with the Spanish football team’s quarter final victory in the Euros championship. Singapore began with $1.8m – the biggest opening of the pandemic. Mexico was the top holdover international market with $3.8m, taking the total to $18.8m. UK and Ireland is next with $2.8m and a $14.1m total – competing for audiences with England’s own Euros football quarter-final victory on Saturday. All figures are estimates.

Next key markets for Fast & Furious 9 are France (July 14) and Germany (July 15), with Japan and Italy to follow in August.

Landing in second place in the worldwide box office chart is Tencent Pictures’ 1921, which tells the story of the founding of the Communist Party in China. The historical drama, which officially opened on July 1 to commemorate the 100th anniversary of the party’s founding, earned $21.7m for the weekend period, and $45.8m so far, a total that also includes previews from the previous weekend.

The film is co-directed by Huang Jianxin who a decade ago co-directed Beginning Of The Great Revival, marking the 90th anniversary of the founding of the party. The earlier film grossed $58.3m worldwide in total. The new film 1921 features many Chinese stars appearing in cameos as key figures in Communist history.

1921 competed in China for patriotic audiences with Enlight Pictures’ The Pioneer, telling the story of party co-founder Li Dazhao, who died at the hands of a warlord in 1927. The Pioneer grossed $8.3m for the weekend period, and $10.8m since its July 1 release. 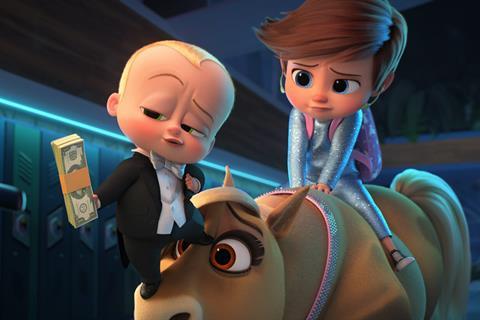 Universal’s The Boss Baby: Family Business and The Forever Purge landed in third and fourth place in the worldwide weekend box office chart, with respective estimated takings of $18.9m and $16.3m. However, those numbers in both cases were largely driven by North America.

For international, The Forever Purge debuted with an estimated $3.6m from the first batch of 22 territories, led by Mexico with $1.3m, Russia with $488,000 and Saudi Arabia with $441,000. The Forever Purge landed in second place in Mexico (behind F9 in its second weekend) and in second place in Russia (behind Pixar’s Luca, likewise in its second weekend).

The Forever Purge is the fifth film in a series that began in 2013 with The Purge. It lands in cinemas three years after the fourth film, prequel The First Purge, which grossed $69.5 in North America, $67.6m for international, and $137.1m worldwide. Italy welcomes The Forever Purge this week, with UK and Ireland, South Korea and Spain following next week.

The original The Boss Baby, which was distributed by Twentieth Century Fox for DreamWorks Animation in 2017, grossed $175m in North America, $353m for international, and $528m worldwide. Both films are directed by Tom McGrath, who co-directed all three Madagascar films. The Boss Baby was based on the book by Marla Frazee.

Next key markets to open The Family Business are South Korea on July 21, Mexico on July 23, and Spain, Brazil, France and Russia/CIS all in August.

Although powerful globally, both The Boss Baby: Family Business and The Forever Purge were beaten at the weekend’s international rankings by a number of holdover titles, including Disney’s Cruella ($9m estimate) and Sony International’s Peter Rabbit: The Runaway ($9.2m estimate). Cruella’s weekend haul has pushed it to $127.8m for international and $76.6m in North America, taking the total through the $200m barrier, with $204.4m.

Cruella fell by just 18% overall in international markets, retaining the top spot with a small 6% drop in France (where the film is not available on Disney+ because of the country’s media chronology laws) and holding steady in second place in South Korea in its sixth week of release.

Disney also has Pixar animation Luca on release – in 13 territories where Disney+ does not operate – grossing an estimated $3.6m for the weekend period and taking the total after three weekends to $17.4m.

Disney is competing for family audiences with The Boss Baby: Family Business and The Croods: A New Age and also with Peter Rabbit: The Runaway. The latter has now reached an estimated $92.1m in international markets, $34.4m in North America and $126.5m worldwide.

‘A Quiet Place’, ‘The Conjuring’ and ‘The Hitman’s Bodyguard’ sequels stay solid in international

Paramount’s A Quiet Place Part II, Warner Bros’ The Conjuring: The Devil Made Me Do It and Lionsgate and Millennium Media’s The Hitman’s Wife’s Bodyguard all posted solid international numbers for the weekend period.

A Quiet Place Part II delivered an estimated $6.3m in international markets, opening in Germany with $880,000 including previews and in Denmark with $160,000 including previews. The film is now playing in 50 territories, representing 87% of the international rollout, and has grossed $122.5m outside North America. On a like-for-like basis, the film is running 10% ahead of the pace set by the original A Quiet Place. Including North America, A Quiet Place Part II has reached $267m – steadily closing the gap with the $341m worldwide total achieved by the original A Quiet Place.

The Conjuring: The Devil Made Me Do It added an estimated $6.0m in international markets, and was likewise boosted by a new opening in Germany (with $1.2m). France generated a robust $1.1m in its fourth weekend, taking the total there to $13.5m, the top result in the territory for any film in the Conjuring universe.

Just behind in weekend international takings is The Hitman’s Wife’s Bodyguard, with an estimated $5.5m, and $24.2m so far. Worldwide total is $55.6m.